Can We Fall Out of Love? 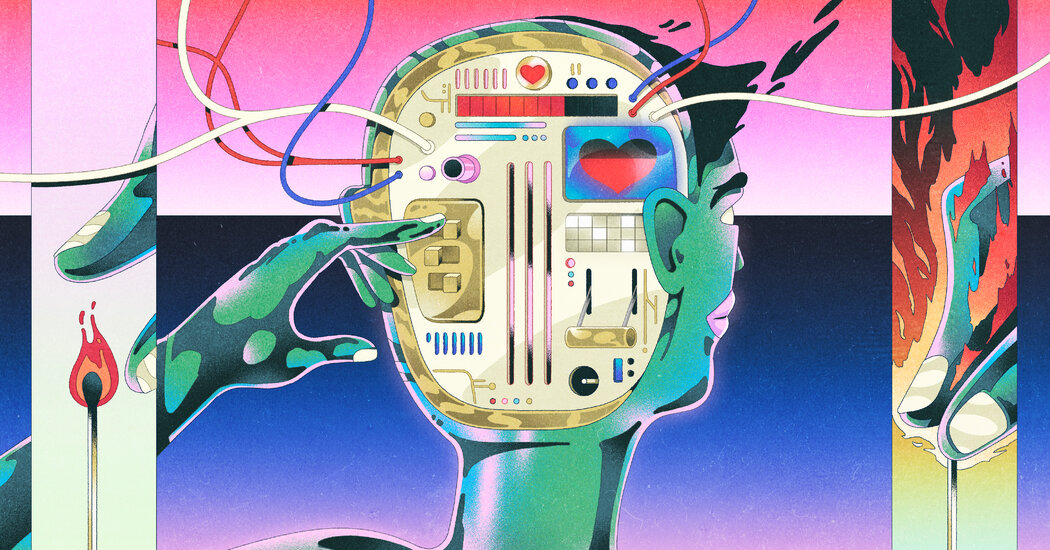 
In May 2020, Omar Ruiz found himself with a broken heart. “My wife told me she was no longer in love with me,” and shortly thereafter, the couple, who had been married 11 years, separated.

Not only was he crushed, he said, but as a marriage and family therapist, “this entire process challenged my professional identity,” said Mr. Ruiz, who is 36 and lives in Boston. “How could I help couples when my own marriage is falling apart?”

And so he determined that he needed to fall out of love.

“People say heartbreak is normal, so we shouldn’t try to fix it,” said Sandra Langeslag, an associate professor of psychological sciences at the University of Missouri-St. Louis who has studied the effects of breakups on the brain. But she points out there are plenty of common, and even serious, diseases that we try to cure, so “why shouldn’t we try to help people with heartbreak and try to move on?”

Heartbreak has inspired music, poetry, visual art, ice-cream-filled listening sessions with friends and even a new hotel. And regardless of the reason — whether death, cognitive impairment, divorce or otherwise — most who experience it hope to recover and maybe even fall in love again with someone new.

But what if we actually had some control over the process? Can one deliberately fall out of love? Some of the science says yes.

“You can work on it,” said Helen E. Fisher, a biological anthropologist and senior research fellow at the Kinsey Institute in New York. She studies the anatomy of love, and in 2005 studied the brain imaging of 100 people using M.R.I.s to pinpoint the circuitry of romantic love.

Dr. Fisher said she discovered that the same area of the brain associated with hunger and thirst — what is known as the ventral tegmental area, or V.T.A. — becomes activated when you’re in love, making it “a drive, not an emotion.” This biological function makes falling out of love about as hard as trying not to feel thirsty. In other words, it’s not easy.

Kisha Mays, 40, who runs a business consultancy in Houston, continued to love her former boyfriend even while he was in prison. They were on and off for years, she said, and got back together for two years before he was released in October 2021. Then two months later, she said, he broke up with her.

“Now it is just healing, rebuilding and learning to trust again,” Ms. Mays said, noting that Reiki and spiritual healing — along with throwing out all of his belongings — have helped.

Dr. Fisher would agree with Ms. Mays’s technique: She suggests treating the recovery process like you would an addiction, and throw out the cards and letters and keepsakes that remind you of the person. Don’t maintain contact or ask mutual friends how that person is doing. “You’re just raising the ghost,” she said.

Dr. Fisher, who put 17 people who had just been dumped through brain scanners, found activity both in the V.T.A. and in brain functions linked to attachment and physical pain. “Not the anxiety linked to physical pain, but physical pain,” she said.

Dr. Langeslag also said there is hope for the heartbroken. She ran two studies to see if people could try to make themselves feel less in love. The strategies that worked? First, it helps to think negative thoughts about the person you are trying to fall out of love with. The downside? “Thinking negatively makes you feel less in love, but doesn’t make you feel any better,” Dr. Langeslag said. “Worse, actually.”

What then? Distraction. Think of things that make you happy other than the person you are trying to fall out of love with. This made people happier but no less in love.

The solution? The “one-two punch,” as Dr. Langeslag described it, or: negative thoughts about the person followed by a dose of distraction.

Her research found that people were able to deliberately decrease their love, but not completely banish it. The average amount of time for healed hurt feelings, according to survey data collected from her subjects, who self-reported, was six months, though the healing time depended on several factors, including how long the relationship lasted.

Rachelle Ramirez, a writer and editor in Portland, Ore., can still recall a time when negative associations did the trick for her. When she was 15, she had what felt like an incurable crush on a classmate who was far less interested in her.

“When I say his disinterest was excruciating, it’s often seen as teen melodrama,” said Ms. Ramirez, who is now 47. “This assumption doesn’t come close to capturing the pain” she felt when thinking of him.

So how did Ms. Ramirez quash it? “I imagined him covered in vomit and holding dead kittens,” she said. “I know it was extreme, and I wouldn’t suggest everyone try this, but it worked for me.”

Some don’t buy into the notion, whether backed by science or not, that willing oneself to fall out of love is possible.

Bethany Cook, a clinical psychologist in Chicago who specializes in neuropsychological assessment, is wary about the notion of being able to control falling out of love. “Love and affection are basic human needs. We can’t deliberately deny ourselves of it. That would be like saying we could consciously choose to stop breathing,” Dr. Cook said. “We don’t have that power, and to pretend we do is a way for the psyche to trick itself into thinking it has control, and is an unhealthy coping mechanism.”

“Humans can fall out of love with someone, just not deliberately,” she added. “To suggest that humans deliberately act in a way that depletes a basic need runs contrary to the basic nature of what makes us human and what science tells us about our species.”

It took Mr. Ruiz, the marriage therapist, more than a year to successfully fall out of love. He said it took a combination of a divorce mediator to help detach from his wife more wholly, as well as immersing himself in activities with friends and family. And the help of a therapist.

“I thank my individual counselor for reminding me that the breakup of a marriage is a two-way street,” he said. “Both my ex-wife and I are held responsible for what happened.”

His therapist “also reminded me that I am human and am as vulnerable to relationship issues as any other person,” he added.

It helps to reframe the notion of falling in or out of love, said Damon L. Jacobs, a marriage and family therapist in Manhattan. “Relationships are conduits for greater energy, joy and fulfillment, but are not the lone source,” Mr. Jacobs said. Having this mind-set, he said, may help you to embrace the pain with more grace and perspective.

“When things don’t work out,” he said, “we know we are still amazing, powerful, fierce loving people who will continue to grow, love and thrive.”