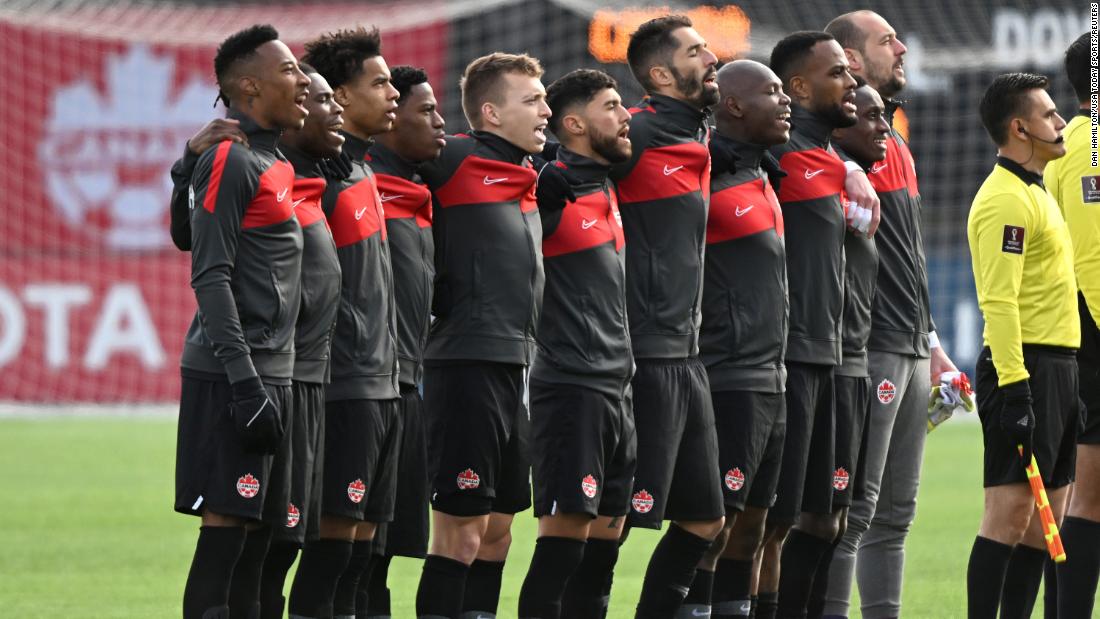 In a statement shared by Olympic gold medalist Christine Sinclair on Twitter on Wednesday, players said they were “deeply troubled” by recent reporting about the “internal workings of Canada Soccer” by reporter Rick Westhead of Canada’s The Sports Network (TSN).

The report, which cited four unnamed sources, revealed that Canada Soccer was unable to adequately compensate players due to a contract it signed with a private company called Canada Soccer Business (CSB), which keeps a large share of the revenue generated by the national teams.

No deal was reached, and the two sides also remain at odds over bonus money to the men’s team from the forthcoming men’s World Cup in Qatar, TSN reported on Tuesday.

But Canada Soccer told CNN that the ongoing negotiations with its national teams “have no bearing on the CSB agreement voted on and passed by our Board.”

“The CSB agreement has no clause pertaining to player competition prize money whatsoever. The two matters are separate,” Paulo Senra, spokesman for Canada Soccer, told CNN in an email.

Canada Soccer did not comment to CNN on allegations criticizing their governance practices.

Neither the Canadian Premier League, which launched Canadian Soccer Business in 2018, nor Sport Canada have responded to CNN’s request for comment. On Wednesday, Canada’s men’s and women’s teams issued a joint statement asking Sport Canada to investigate Canada Soccer’s governance practices, and the circumstances surrounding the agreement made with CSB.

The statement added that the investigation must look into the motivations of those involved in the agreement with CSB and examine why the agreement remained in place when Board members allegedly expressed concern.

Both national teams asked to be “properly consulted” when it came to key decisions taken by the governing body which impacted them.

Senra told CNN that a board meeting had taken place on March 27, 2018, and members discussed and approved the CSB agreement, having reviewed the agreement prior to the meeting.

Canada Soccer addressed its partnership with CSB in a statement released on Tuesday, saying it was “proud of this landmark partnership” which, it said, would “help to develop and grow the game of soccer across the country.”

The federation also said that after previously engaging its men’s and women’s national teams independently on contract negotiations, it had prioritized “fairness and pay equity” in its ongoing negotiations with players.

Negotiations with the men’s national team were ongoing, the federation said, and an updated offer had been made on June 23. “The same offer is in front of our Women’s National Team,” the statement read.

But the players said the statement “tries unsuccessfully to put a positive spin on what the article reveals,” and “fails to confirm that Canada Soccer will immediately open its books and records and address its lack of transparency on a go-forward basis.”

It added: “Since Canada Soccer does not acknowledge any problems with its governance or leadership, it also does not commit to addressing any of the problems identified in the article.”

Canada’s men are set to participate at this year’s World Cup, which takes place in Qatar from November to December, having qualified for football’s biggest tournament for the first time in 36 years.

FIFA, world football’s governing body, has allocated $440 million in prize money. Teams eliminated at the group stages will be awarded $9 million each, while every country competing will receive $1.5m before the start of the tournament to cover preparation costs. The further teams progress, the more prize money they will receive, with the winners netting $42 million.

In June, the men’s national team went on strike ahead of a friendly with Panama due to the dispute over player compensation.

In an open letter posted by TSN’s Westhead on Twitter, the men’s team said they wanted 40 percent of World Cup prize money, a friends and family travel package for the tournament and an “equitable structure with our women’s national team that shares the same player match fees, percentage of prize money earned at our respective FIFA World Cups and the development of a women’s domestic league.”

In its statement on Wednesday, Canada Soccer said such demands were “untenable” and not “financially viable” because of the federation’s commitment to paying the women’s national team the same percentage as the men for each major tournament. The statement added that Canada Soccer was committed to finding a resolution.

In an email to CNN on Thursday, Canada Soccer’s spokesman Senra said that the federation’s newly appointed General Secretary had offered to meet the women’s team and its representatives in Mexico, following the conclusion of the Concacaf W Championships, which serves as a qualifying tournament for the 2023 Women’s World Cup and 2024 Paris Olympics.

“We continue to be committed to open and transparent conversations with both our Teams with the aim of finding a resolution based on the values of fairness and equal pay,” he added.