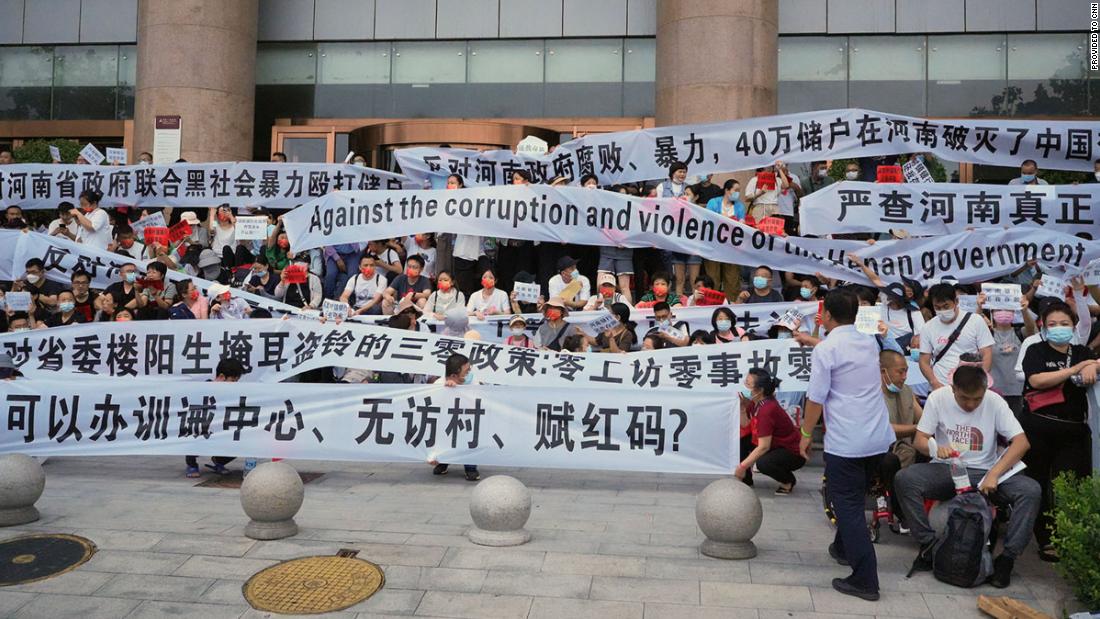 Anguished depositors have staged several demonstrations in the city of Zhengzhou, the provincial capital of Henan, over the past two months, but their demands have invariably fallen on deaf ears.

On Sunday, more than 1,000 depositors from across China gathered outside the Zhengzhou branch of the country’s central bank, the People’s Bank of China, to launch their largest protest yet, more than half a dozen protesters told CNN.

The demonstration is among the largest China has seen since the pandemic, with domestic travel limited by various Covid restrictions on movement. Last month, Zhengzhou authorities even resorted to tampering with the country’s digital Covid health-code system to restrict the movements of depositors and thwart their planned protest, sparking a nationwide outcry.

This time, most protesters arrived outside the bank before dawn — some as early as 4 a.m. — to avoid being intercepted by authorities. The crowd, which included the elderly and children, occupied a flight of imposing stairs outside the bank, chanting slogans and holding up banners.

“Henan banks, return my savings!” they shouted in unison, many waving Chinese flags, in videos shared with CNN by two protesters.

Using national flags to display patriotism is a common strategy for protesters in China, where dissent is strictly suppressed. The tactic is meant to show that their grievances are only against local governments, and that they support and rely on the central government to seek redress.

“Against the corruption and violence of the Henan government,” a banner written in English read.

A large portrait of late Chinese leader Mao Zedong was pasted on a pillar at the entrance of the bank.

Across the street, hundreds of police and security personnel — some in uniforms and others in plain clothes — assembled and surrounded the site, as protesters shouted “gangsters” at them.

The face-off lasted for several hours until after 11 a.m., when rows of security officers suddenly charged up the stairs and clashed with protesters, who threw bottles and other small objects at them.

The scene quickly descended into chaos, as security officers dragged protesters down the stairs and beat those who resisted, including women and the elderly, according to witnesses and social media videos.

One woman from eastern Shandong province told CNN she was pushed to the ground by two security guards, who twisted and injured her arm. A 27-year-old man from the southern city of Shenzhen, surnamed Sun, said he was kicked by seven or eight guards on the ground before being carried away. A 45-year-old man from the central city of Wuhan said his shirt was completely torn at the back during the scuffle.

Many said they were shocked by the sudden burst of violence by the security forces.

“I did not expect them to be so violent and shameless this time. There was no communication, no warning before they brutally dispersed us,” said one depositor from a metropolis outside Henan who had protested in Zhengzhou previously, and who requested CNN conceal his name due to security concerns.

“Why would government employees beat us up? We’re only ordinary people asking for our deposits back, we did nothing wrong,” the Shandong woman said.

The protesters were hurled onto dozens of buses and sent to makeshift detention sites across the city — from hotels and schools to factories, according to people taken there. Some injured were escorted to hospitals; many were released from detention by the late afternoon, the people said.

CNN has reached out to the Henan provincial government for comment.

The Zhengzhou Business District Police Station — which has jurisdiction over the protest site — hung up on CNN’s call requesting comment.

Late on Sunday night, the Henan banking regulator issued a terse statement, saying “relevant departments” were speeding up efforts to verify information on customer funds at the four rural banks.

“(Authorities) are coming up with a plan to deal with the issue, which will be announced in the near future,” the statement said.

Police in Xuchang, a city neighboring Zhengzhou, said in a statement late Sunday they recently arrested members of an alleged “criminal gang,” who were accused of effectively taking control over the Henan rural banks starting from 2011 — by leveraging their shareholdings and “manipulating banks executives.”

The suspects were also accused of illegally transferring funds through fictitious loans, the police said, adding that some of their funds and assets had been seized and frozen.

The protest comes at a politically sensitive time for the ruling Communist Party, just months before its leader Xi Jinping is expected to seek an unprecedented third term at a key meeting this fall.

Large-scale demonstrations over lost savings and ruined livelihoods could be perceived as a political embarrassment for Xi, who has promoted a nationalistic vision of leading the country to “great rejuvenation.”

Henan authorities are under tremendous pressure to stop the protests. But depositors remain undeterred. As the issue drags on, many have become ever more desperate to recover their savings.

Huang, the depositor from Wuhan, lost his job in the medical cosmetology industry this year, as businesses struggled in the pandemic. Yet he is unable to withdraw any of his life savings — of over 500,000 yuan ($75,000) — from a rural bank in Henan.

“Being unemployed, all I can live on is my past savings. But I can’t even do that now — how am I supposed to (support my family)?” said Huang, whose son is in high school.

Sun, from Shenzhen, is struggling to keep his machine factory from bankruptcy after losing his deposit of 4 million yuan ($597,000) to a Henan bank. He can’t even pay his more than 40 employees without the funds.

Sun said he was covered in bruises and had a swollen lower back after being repeatedly stomped by security guards at the protest.

“The incident completely overturned my perception of the government. I’ve lived all my life placing so much faith in the government. After today, I’ll never trust it again,” he said.