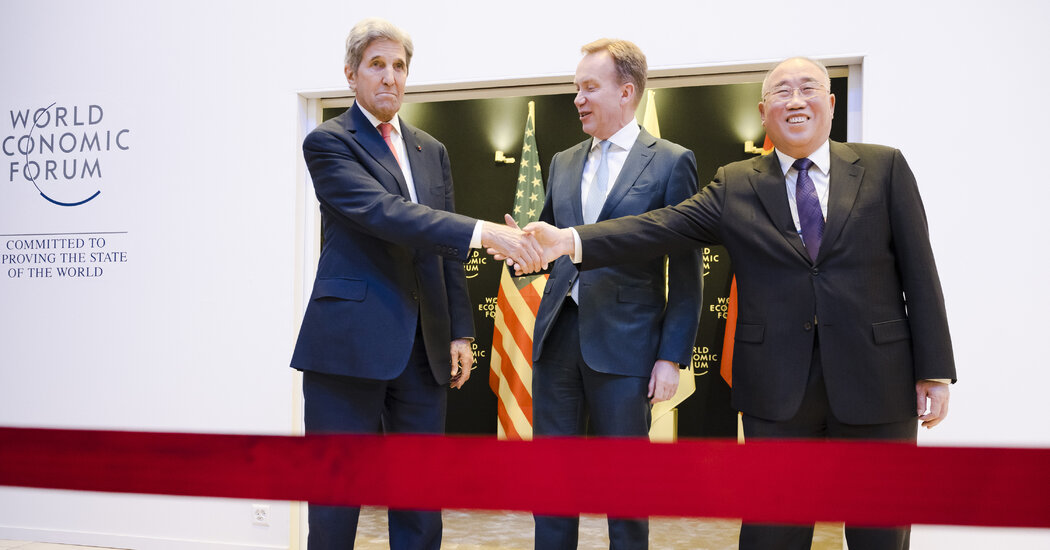 
WASHINGTON — More than 50 corporations have joined a global “buyers’ club” that pledges to purchase aluminum, steel and other commodities made from processes that emit little to no carbon, a move that will be announced on Wednesday by leaders at the World Economic Forum in Davos, Switzerland.

John Kerry, President Biden’s special climate envoy, and a group of billionaire corporate titans gathering at a Swiss Alps resort for the forum — including Bill Gates, the co-founder of Microsoft, and Marc Benioff, the chief executive officer of Salesforce — will unveil a set of “green” purchasing pledges worth $8.5 trillion.

The idea behind the buyers’ club, known as the First Movers Coalition, is to stoke demand for green versions of materials that have proved difficult to manufacture without significant carbon dioxide emissions.

The group includes Ford Motor and the Volvo Group, both of which have pledged that 10 percent of their primary aluminum purchases will be manufactured with little to no carbon emissions by 2030. Aluminium production is responsible for 2 percent of global emissions — and the advanced technologies needed to create it without releasing carbon dioxide are not yet commercially available.

Google’s parent company, Alphabet, and Microsoft and Salesforce have collectively promised to spend $500 million on technology to capture and store carbon emissions. Three other companies — AES, an electric power distribution company headquartered in Virginia; Mitsui O.S.K. Lines, a Japanese transport company; and Swiss Re, a reinsurance company based in Switzerland — each committed to removing 50,000 tons of carbon from the atmosphere by 2030. The governments of India, Japan, Sweden, Denmark, Italy, Norway, Singapore and Britain have also joined the coalition.

“We are creating a demand for low-carbon products,” particularly for nascent clean technologies in steel, aviation, aluminum, cement and chemicals, said Borge Brende, president of the World Economic Forum. Those sectors are responsible for about 30 percent of global emissions, but that figure is expected to rise to about 50 percent of emissions by midcentury.

Mr. Brende noted that with climate change already having an impact in countries like India and Pakistan, which have faced record-breaking heat for weeks, the human and economic toll of global warming is mounting.

“The price of inaction far exceeds the price of action when it comes to climate change,” Mr. Brende said. “If we don’t use the purchasing power of the big companies now to address the hard-to-abate sectors, this is going to have such a high price for the world moving forward.”

The future of fossil fuels and the fight against climate change in the wake of Russia’s invasion of Ukraine and the resulting energy crisis has been a major topic this week in Davos. Ursula von der Leyen, president of the European Commission, said she hoped to see an agreement among countries in the European Union to sanction Russian oil in the coming weeks.

Speaking on the main stage at Davos on Tuesday, Ms. von der Leyen said there was no doubt that “we are witnessing how Russia is weaponizing its energy supplies.”

Senator Joe Manchin III, Democrat of West Virginia, a crucial vote for potential climate legislation in the evenly divided Senate, told a crowd in Davos that fossil fuels — the burning of which is driving climate change — must be part of the solution.

“The United States of America has an abundant supply of natural gas and oil,” Mr. Manchin said, adding, “We can use our fossil and the cleanest technology humanly possible to make sure that we are reliable, we have reliability and we have security.”

Mr. Kerry on Tuesday sat on a panel with his Chinese counterpart, Xie Zhenhua. The two later met privately — the first face-to-face meeting between the top negotiators of the world’s two biggest climate polluters since the global climate summit last year in Glasgow.

Hurricanes and air pollution. A new study found that particulate air pollution has a significant effect on the frequency of hurricanes. Over the past four decades, the decline in air pollution in North America and Europe was associated with a rise in the number of hurricanes; increasing pollution from growing economies had the opposite effect.

Speaking on the sidelines at the conference, Mr. Kerry called the meeting “constructive.” He acknowledged that the broader disagreements between Washington and Beijing were having an impact on climate talks. But, he said, “we are trying very hard to maintain capacity for serious progress because the world can’t make progress without China and the United States working on this.”

“It’s imperative we continue to work together,” he added.

In a joint interview, Mr. Kerry and Mr. Brende said they believed it was still possible to meet the current need for more oil and natural gas to replace Russian energy while still significantly cutting fossil fuel emissions over the next decades.

“I think it’s fair to say that the situation in Ukraine has changed some people’s narrative,” Mr. Kerry said. “And there’s a risk here that some of the efforts which had a lot of momentum coming out of Glasgow are being relitigated, if you will, in certain quarters.” But, he added, “the private sector is stepping up here in an unprecedented way.”

Mr. Kerry intends to meet again with Mr. Xie next week in Berlin, where leaders are gathering for a meeting of officials from the seven countries with the largest advanced economies, known as the Group of 7.

China has pledged to start reducing its carbon dioxide emissions by 2030, but has not said how high its emissions will reach before the curve bends.

Mr. Xie said Tuesday that “concrete action has been taken,” referring to China’s deployment of wind, solar and battery storage, and said nations must now make good on the promises they had already made.

The United States under Mr. Biden has pledged to cut emissions at least 50 percent below 2005 levels by the end of this decade. Congress has not passed legislation that would enable those cuts, however, and a Supreme Court ruling this summer could limit the administration’s ability to use regulatory actions to tackle climate change.

“The United States, even through Congress, has not yet passed a climate piece of legislation, has been doing an enormous amount through executive order,” Mr. Kerry said, insisting that “we are full-on engaged here” and that “we do have a path” in the United States to meeting Mr. Biden’s climate goals. However, he acknowledged, “we’re not on it completely yet.”