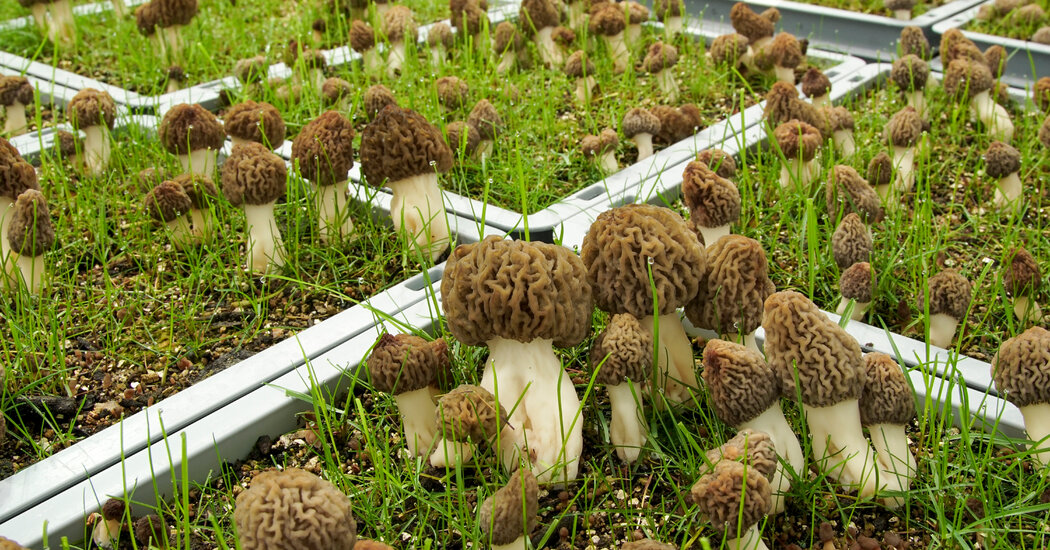 
When new buds emerge on trees and the ground warms with the advent of spring, foragers fan out through woodlands, scanning the leaf litter for morel mushrooms.

Arguably the most iconic of wild fungi, morels stand 3 to 6 inches tall and sport a signature cone-shaped lattice cap in shades of cream to chocolate brown. Prized for their nutty, earthy taste, they sell for as much as $50 a pound fresh and $200 a pound dried. They appear for just a fleeting few weeks — in New York, generally from late April to early June.

Experienced morel hunters return to well-guarded spots year after year, often exhibiting a form of selective hearing loss when asked where they collected their haul.

“There’s something about morels — they have a mystique that people are fascinated by,” said Gregory Bonito, a biologist studying morels and other fungi at Michigan State University. And unlike some wild mushrooms, which can be easily cultivated, morels have a quirky life cycle that makes them notoriously tough to grow, Dr. Bonito explained.

Cultivating morels isn’t impossible. Until 2008, at least one U.S. grower produced them commercially. And since about 2014, farmers in China have done it outdoors in the spring, but yields can be variable, Dr. Bonito said. He leads a small morel-farming project in Michigan and surrounding states funded by the U.S. Department of Agriculture. All the participating farmers but one grew at least one morel last year, he said, though this year’s numbers are ticking up.

But prospects for morels on demand appear to be looking up. In December, after four decades of research, Jacob and Karsten Kirk, twin brothers from Copenhagen, announced that they had devised a method to reliably cultivate hefty amounts of morels indoors, year-round, in a climate-controlled environment.

The Kirks, who are 64 and who often finish each other’s thoughts, say they have grown about 150 kilograms (330 pounds) of the mushrooms using their system. Last year’s crop yielded about 4.2 kilograms over a 22-week cycle, which tallies up to about 10 kilograms per square meter (or 22 pounds per square yard).

“That’s really a lot,” Jacob Kirk said. “Now we can see the commercial aspect of this.” With their method, Karsten Kirk added, the cost for producing a morel “will be roughly the same as producing a white button mushroom.”

It’s not yet clear what the Kirk brothers’ achievement will mean for the prospect of sourcing morels more widely and affordably. But if it happens, “it will be a game changer for the food industry,” said Kenneth Toft-Hansen, a Danish chef and winner of the 2019 Bocuse d’Or, an international competition often described as the culinary Olympic Games.

Jacob and Karsten Kirk said they were bewitched by morel cultivation as undergraduate students at the University of Copenhagen in the late 1970s. Even as teenagers, they were ardent biologists who built themselves a home laboratory for recreating experiments and observations described in their textbooks. They also loved foraging for mushrooms and other wild foods. To merge those interests, they began raising white button and oyster mushrooms, which are relatively easy to grow. But they set their sights on morels upon learning how expensive they were and that they had never been successfully cultivated.

After graduating from university, Jacob and Karsten began to tinker. Using a specimen they found in the woods, they grew morel mycelium — the fungus equivalent of roots — in a dish and a few years later, set out to generate structures called sclerotia, hardened mycelial nuggets that store nutrients that morels and some other types of fungi rely on to fruit.

But just then, in 1986, two researchers at Michigan State University and another from California caused a hubbub in the mushroom cultivation world when they published the first of three patents describing a method for growing morel sclerotia and coaxing those sclerotia to produce morels. In 1988, the Kirk brothers found an investor to fund their efforts to replicate that method. Since then, they have rented space at the University of Copenhagen’s agricultural research campus for their privately funded work on what they call the Danish Morel Project.

According to Gary Mills, one of the inventors of the patents and general manager of the specialty mushroom cultivation company Gourmet Mushrooms in Scottsville, Mich., the method described in the 1980s worked great. In the 1990s and from 2005-2008, he and his colleagues were growing hundreds of pounds of morels each week in facilities in Michigan and Alabama, Mr. Mills said. Tom Monaghan, who founded Domino’s Pizza, became an investor and built the first pilot plant for the commercial cultivation of morels. But in 2008, the financial crisis hit, and morel growing operations ceased.

Mr. Mills said Gourmet Mushrooms planned to return to morels, but because of the high energy and labor costs, making the cultivation process economically viable was a major challenge. One of his college professors often remarked that anyone who learned to grow morels could easily become a millionaire. “Well,” Mr. Mills said wryly, “I can tell you, that may or may not be true.”

But the Kirk brothers say they’re not especially motivated by millions. “We have been learning and having fun doing these experiments,” Karsten said. The brothers never did replicate the U.S. patents, and they said they heard that other scientists around the world were having trouble too, Jacob said. They believe their new method is highly sustainable.

Developing it was a winding process. By 2003, they had achieved some incremental steps, but the brothers had not yet grown a single morel indoors. Money was running low, and it seemed as if they might have to close up shop. But just when they most needed the boost, a small outdoor cultivation project bore fruit. In those experiments, the Kirks had set out to recreate the growth conditions of a large cluster of morels they’d found in nature. They said they soon managed to translate their outdoor success into indoor morel growth. “We now had a standard method that we could improve step by step,” Jacob said.

Since 2005, they have worked on perfecting that method. They created and optimized artificial soil and two different types of nutrient substrates, and tested different climate and light conditions. Based on their observations in nature, they found that including grass in their soil somehow stimulates the mycelium. And after developing a prototype for several cultivation strategies, they designed and built a system of movable pallets to commercialize the most productive one.

The Kirks work alone and keep meticulous records of their experiments. Only two other people know the full details of the operation: their investor and Helena Kirk, Karsten’s daughter, who helps out with communications. As brothers, they don’t worry about offending each other, as friends or colleagues might, Helena said. “They always have small arguments with each other, and they always make up within an hour.” Overall, though, they are temperamentally pretty similar, she added. “Jacob is a little bit more creative,” she said, “while my dad is more realistic.”

After working so single-mindedly for so long on the science of morel cultivation, the Kirks are still figuring out how best to commercialize their product. So far, they have given away most of their yield to their investors and to a handful of chefs, including Mr. Toft-Hansen.

He first connected with the Kirks in 2014. At the time, he was training for his first Bocuse d’Or, which asks contestants to use ingredients sourced from their country. “I had heard about these two guys doing this crazy project — morels in Denmark,” Mr. Toft-Hansen said. When he asked the Kirks if he could include their morels in his dishes, they gave him a small haul — about 20 mushrooms. Since then, he said, the morels he receives from the Kirks have only gotten better.

In the kitchen, cultivated morels have some big advantages over foraged ones, the chef noted. Morels grown in nature often carry dirt, bugs and slugs, but washing off the junk means wetting the mushroom, which degrades its texture. Foraged mushrooms are also subject to the ravages of sun and rain. “If it’s been raining the day before, the mushroom is probably soggy and the quality starts to fall apart,” he explained.

So far, the Kirks say they have been able to grow morels from 92 out of 102 specimens, or variants, of a particular type of morels called black morels that they’ve collected over the years. Last year’s bumper crop came from the sclerotia of two of them — variant 195 and 234.

But the brothers’ morel experiments are far from over. This season, they tested 22 new variants they found last year, from which they harvested nine kilograms (20 pounds) in the past few weeks. All of the new variants produced morels, and six were especially fast-growing and plump. One of them, 340, is the duo’s new darling. “It’s just like finding gold when you find a new strain,” Karsten said.