Deforestation Is High, Despite COP26 Promises 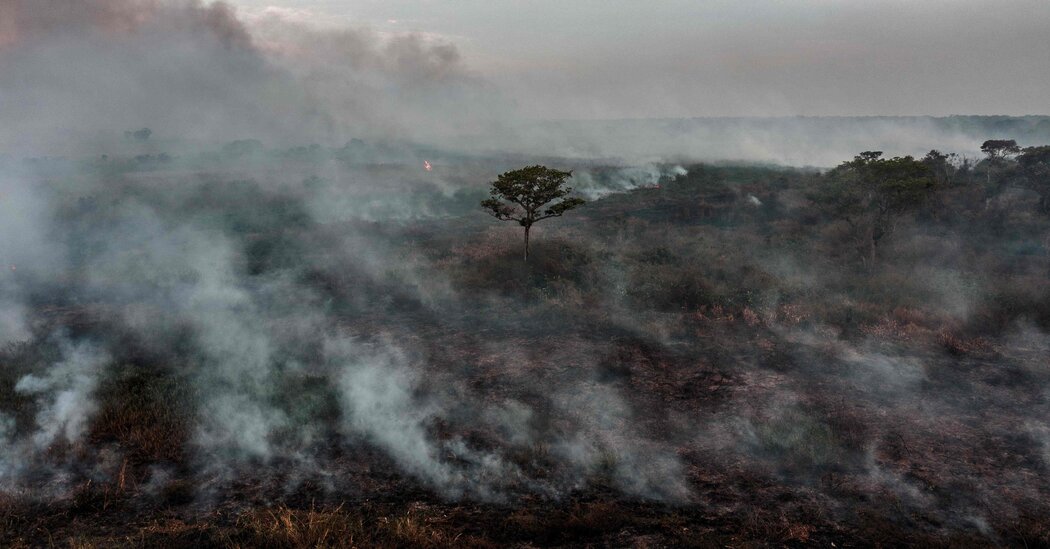 
Halting deforestation was one of the major commitments to come out of the international climate talks last year in Glasgow, but there was scant evidence of progress in 2021, according to a report released Thursday.

The annual report by the World Resources Institute, a research group based in Washington, D.C., found that tropical regions lost 9.3 million acres of primary old-growth forest in 2021. That resulted in 2.5 billion metric tons of emissions of carbon dioxide, or about two and a half times as much as emitted by passenger cars and light trucks in the United States each year.

Brazil had by far the largest share of forest loss, accounting for more than 40 percent of the total, followed by the Democratic Republic of Congo and Bolivia.

Rod Taylor, global director of the institute’s global forests program, said that the essentially flat rate of deforestation over the last four years was not good “for the climate, for the extinction crisis, and for the fate of many forest peoples.”

Most forest loss in the tropics is linked to agriculture or other activities, like mining. Forests are clear cut and often burned, and these fires can grow out of control, adding to the devastation.

In addition to adding planet-warming gases to the atmosphere, deforestation eliminates habitat for plants and animals, degrades land and affects weather patterns and flooding.

The situation has become so dire that at the United Nations climate talks in Glasgow last November, 141 nations, including Brazil and the Democratic Republic of Congo, pledged to “halt and reverse” deforestation by 2030.

Drastic steps will be needed to produce the consistent annual declines required to reach that goal, said Frances Seymour, a senior fellow at the institute.

“The numbers we’re sharing today perhaps could be considered a baseline for assessing the effectiveness of the actions that they take to follow through” on those pledges, she said.

There was some good news in the report, especially from Asia. In Indonesia, forest loss declined by one-fourth from 2020, the fifth year in a row of falling totals. Malaysia also had a fifth straight year of declines, although forest loss in 2021 was only slightly less than in 2020.

Since suffering extensive forest and peat fires in 2016 that resulted in a huge loss of tree cover and widespread severe air pollution, Indonesia has instituted tougher regulations on the palm oil industry and others responsible for most of the loss. Corporations have also been pressured to pledge to reduce deforestation.

“This indicates that corporate commitments and government actions are clearly working, and that Indonesia is heading in the right direction to make some of its climate commitments,” said Hidayah Hamzah, a senior manager with the institute’s Indonesia office.

A new law that has the potential to weaken environmental regulations in Indonesia is cause for concern, said Andika Putraditama, also in the Indonesia office. If the government fails to maintain adequate protective measures, he said, companies would need to increase efforts to provide voluntary safeguards, like the ethical supply chain movement that supports the use of sustainable materials.

In West Africa, Gabon and the Republic of Congo showed declines in tree loss. But large-scale deforestation continued in the Democratic Republic of Congo, which lost 1.2 million acres, largely as a result of small-scale agriculture and charcoal production.

In Brazil, tree-cover loss increased substantially in the western part of the Amazon basin. This could be linked to the development of roads and other infrastructure in the region, which allows mining and other forest-destroying activities to occur.

A recent study showed that the Amazon, the world’s largest tropical forestlands, is less able to recover from disturbances like droughts and logging, and that at least part of the region is approaching a threshold where it will shift from forest to grasslands.

“That would release enough carbon into the atmosphere to blow the Paris Agreement goals right out of the water,” Ms. Seymour said. The implication of all of the report’s findings, she added, “is that we have to dramatically reduce emissions from all sources.”

“No one should even think anymore about planting trees instead of reducing emissions from fossil fuels,” she said. “It’s got to be both, and it’s got to be now before it’s too late.”

The report found that overall in the tropics, more than 27 million acres of forest cover was lost. But in its analysis the institute focuses on older primary forests in humid regions, which play by far the greatest role in keeping carbon dioxide out of the atmosphere and in maintaining biodiversity.

The report is a collaboration between the institute and the Global Land Analysis and Discovery laboratory at the University of Maryland, which has developed methods to analyze satellite imagery to determine the extent of forest cover.