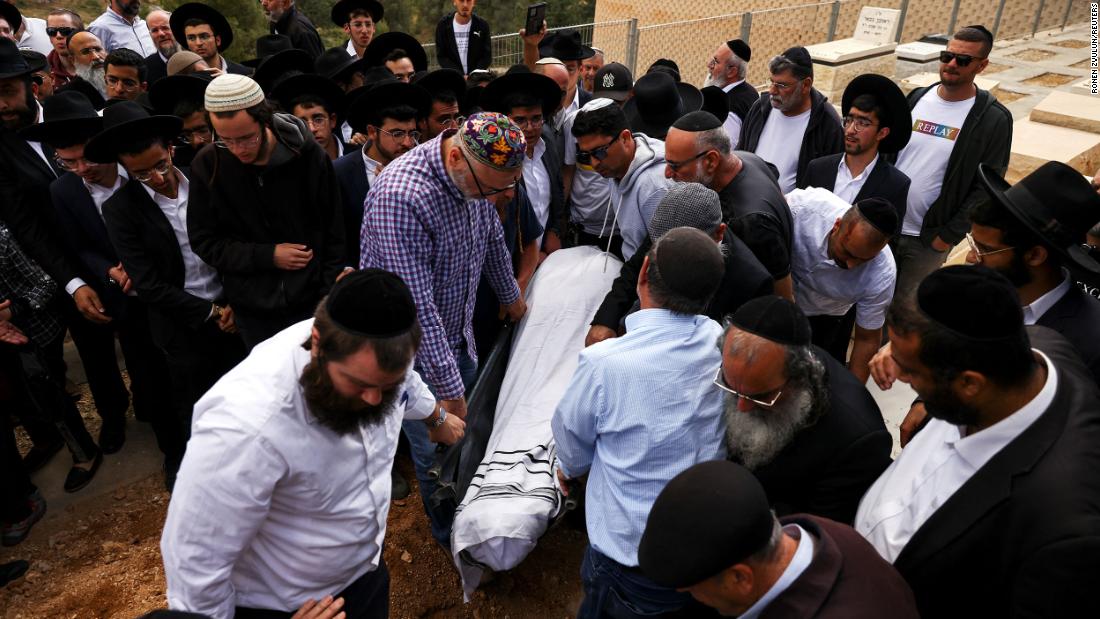 The three men who were killed died at the scene, emergency services said. Four other men aged between 23 and 60 were hospitalized.

The hospitals treating them said Friday that three were in life-threatening conditions.

Police are conducting a manhunt for the two suspects involving helicopters, road blocks and vehicle checkpoints.

Pictures from the scene Thursday night showed multiple emergency vehicles including ambulances and motorcycles arriving after reports of the attack.

“This is a very difficult event. When we arrived at the place we noticed that it was a complex scene,” Alon Rizkan, a paramedic from Israel’s emergency response service Magen David Adom (MDA), said in a statement Thursday.

“Near the square in Ibn Gvirol, a 40-year-old man was lying next to a car with serious injuries to his body. We performed medical tests but he was without signs of life and we had to declare his death.

“I went down the stairs to the nearby park, we performed resuscitation operations on a 40-year-old man who was unconscious and in the end we were forced to declare his death,” the paramedic added.

“Tens of meters away, another wounded man lay unconscious, also in his 40s with serious injuries, and after resuscitation, he was pronounced dead,” he said.

Elad, where the attack took place, is a quiet, small and largely religious town in central Israel not far from Ben Gurion International airport.

Calls for peace amid escalating violence

The attack marks the latest in a series of violent incidents that have put Israel and the Palestinian territories on edge in recent weeks.

Dozens have died in the violence in Israel and the West Bank since March 22, according to a CNN count.

In a statement, Prime Minister Naftali Bennett condemned Thursday’s attack, and offered his condolences to the families affected.

“Our enemies have embarked on a murderous campaign against Jews wherever they are. Their goal is to break our spirit; but they will fail. We will get our hands on the terrorists and their supportive environment, and ensure they pay the price,” Bennett said in the statement.

Israel confirmed it will keep Gaza and the West Bank sealed at least through Sunday following the attack, extending closures already in place for Israeli holidays.

The Israeli Defense Forces said Palestinians living in those territories would only be allowed to enter Israel with prior permission on a humanitarian basis, under special circumstances or for medical reasons.

“The killing of Palestinian and Israeli civilians only leads to a further deterioration of the situation at a time when we all strive to achieve stability and prevent escalation,” Abbas said in the statement.

Abbas warned against Jewish settlers using the incident as an excuse “to carry out attacks and reactions against our Palestinian people.”

He added that the “lasting, comprehensive and just peace is the shortest and best way to provide security and stability for the Palestinian and Israeli peoples and the peoples of the region.”

“This is a brave and heroic act that comes as a natural response to the violations of the occupation against al Aqsa Mosque,” he told CNN, referring to the presence of Israeli security in the compound.

The attack “sends a message to the occupation that all its crimes and violations will only return to it,” he said, referring to Israel. “Our natural right is for our people to respond to the crimes of the occupation, to deter it, and to defend our rights. Today, the occupation is paying the bill for its violations.”

“The desecration of the occupation army and settler gangs of al Aqsa Mosque crossed all red lines, and our people will continue to respond to this aggression,” he said, a nod to clashes that occurred at the compound on Thursday.

Only Muslims are allowed to visit the holy site, called the Temple Mount by Jews and Haram al-Sharif or Noble Sanctuary by Muslims, during the last 10 days of Ramadan each year. Groups of Israeli Jews began visiting again on Thursday.

On Thursday, US Secretary of State Antony Blinken condemned what he described as a “terrorist attack,” saying in a statement it “was particularly heinous coming as Israel celebrated its Independence Day.”

“We remain in close contact with our Israeli friends and partners and stand firmly with them in the face of this attack,” he added.

US State Department Spokesperson Ned Price also said Thursday that the attack appears to be “the latest in a what has been a string of despicable terrorist attacks that have rocked Israel in recent weeks.”

“Our commitment to our Israeli partners, to Israel’s security, that is ironclad, and we’ll provide any and all assistance that may be required in this case,” he added.