Giant sculpture made from 350 trees to stand outside Buckingham Palace 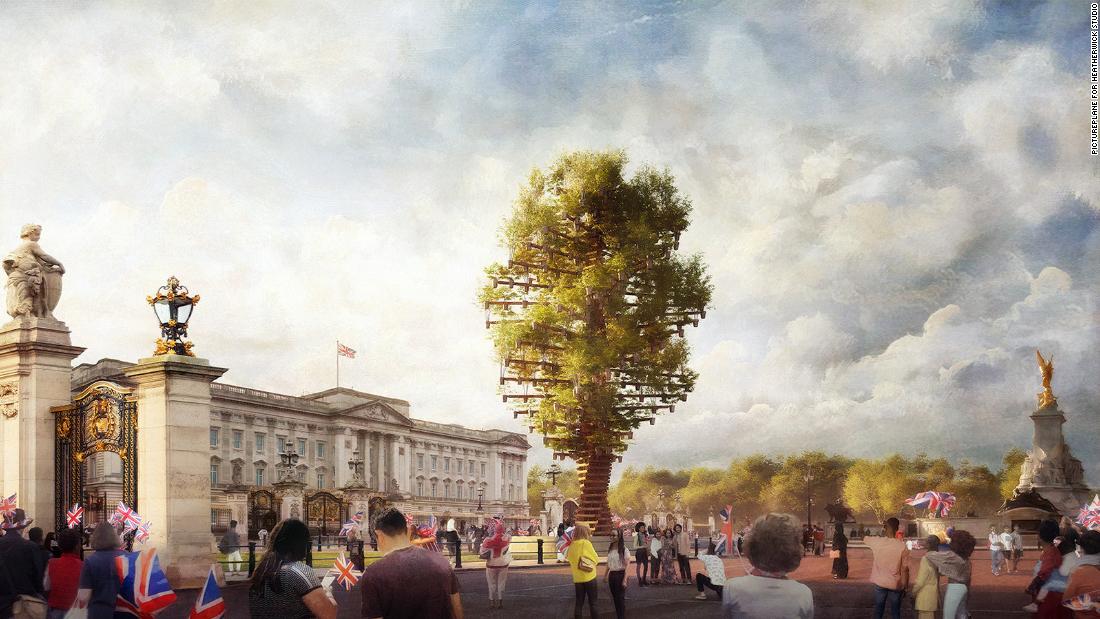 When Britain marks Queen Elizabeth II‘s 70 years on the throne in June, a striking tree-shaped sculpture will stand outside Buckingham Palace, at the very center of the celebrations.
Designed by Heatherwick Studio, the 69-foot “Tree of Trees” will feature 350 indigenous British trees attached to a giant steel frame, reflecting The Queen’s Green Canopy (QGC) initiative that invited Britons to “plant a tree for the Jubilee” between October 2021 and March 2022. More than a million trees were planted during these months, according to the QGC website.

British designer Thomas Heatherwick, founder of Heatherwick Studio, said in a press release that the Tree of Trees was “coming together from the workshops and nurseries across the country as part of an incredible community campaign that’s literally changing the landscape of our nation.”

Heatherwick has been behind many high-profile design projects, from London’s new Routemaster buses to the 2012 Olympic Cauldron. The latest sculpture revisits the arboreal theme of some of the studio’s previous works.

Last year in Shanghai, Heatherwick and his team created 1000 Trees, a shopping mall with 1,000 trees in planters atop the building’s 1,000 structural columns.
In the US, Heatherwick built Little Island, a park on a pier on the Manhattan riverside that featured more than 100 different tree and plant species native to New York.

All 350 trees on the Tree of Trees will sit in aluminum pots embossed with the Queen’s cypher, according to Heatherwick Studio. In October, after the Jubilee festivities, the trees will be distributed to community organizations, it said.

The Platinum Jubilee weekend celebrations, which include a pageant and beacon lighting in more than 1,500 places across the UK and its overseas territories, will run from June 2 until June 5.