Giraffes May Be Long-Necked for Fights, Not Just Food 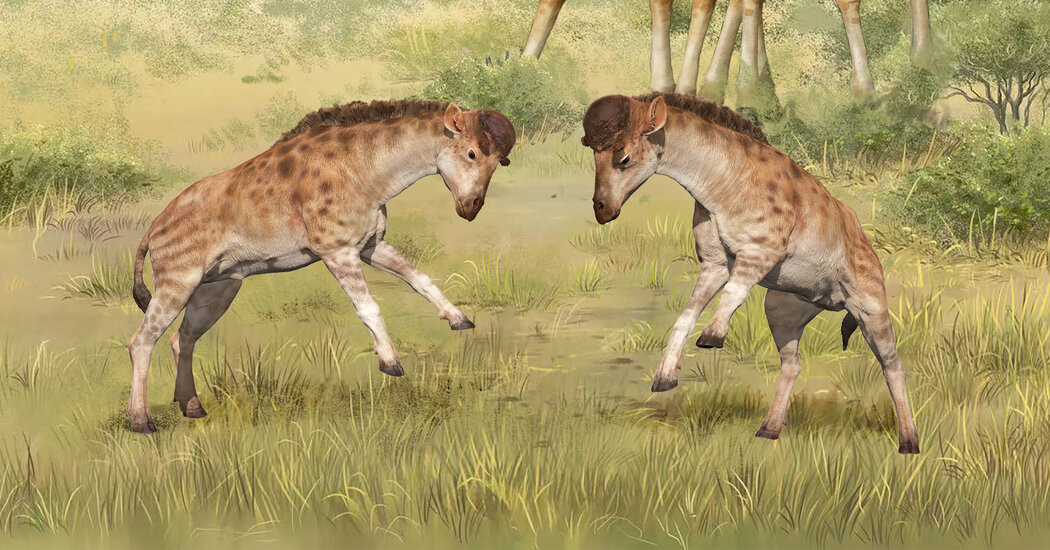 
Head-butting is an ancient and widespread form of conflict resolution. Dinosaurs like Pachycephalosaurus had sturdy skulls, and knocking heads remains common in bighorn sheep, chameleons and even whales.

But the researchers suggested that Discokeryx was uniquely adept at head-to-head combat. The team scanned and reconstructed Discokeryx’s skull and neck in three dimensions. They then compared it with modern head-butters: muskoxen, argali mountain sheep and Himalayan blue sheep. Using computer models, they deduced that Discokeryx’s skull absorbed more strikes and better cushioned its brain than its modern counterparts. It might have died without that — the team estimated that collisions between Discokeryxes were likely twice as forceful as head-butting muskoxen, which strike each other at nearly 25 miles per hour.

The series of interlocking neck joints have yet to be discovered in any other vertebrate, living or dead, giving Discokeryx the most-optimized head-bashing gear yet discovered, according to the researchers. “This animal is an extreme example of using head-butting as a fighting tool,” Dr. Meng said.

While the biomechanics of the new fossil are interesting, that they butted heads is not particularly surprising, says Nikos Solounias, a paleontologist at the New York Institute of Technology who studies giraffe evolution and was not involved in the new study. Virtually all modern hoofed mammals use their heads to tussle, including modern giraffes. But their violent combat style is much different than how Discokeryx dueled. Giraffes “hit sideways with their head and neck,” instead of head on, Dr. Solounias said, clobbering each other with their bony, hornlike ossicones.

While it appears that some of the earliest giraffe relatives like Discokeryx were built more for fighting than foraging, they still had a specialized diet. Although they were unable to reach the treetops, chemical analyses of Discokeryx’s teeth revealed that the ancestral giraffe occupied a distinct ecological niche.

“As the males used their necks for fiercer and fiercer fights and their necks became longer and longer, they finally could reach the tallest leaves,” he said.