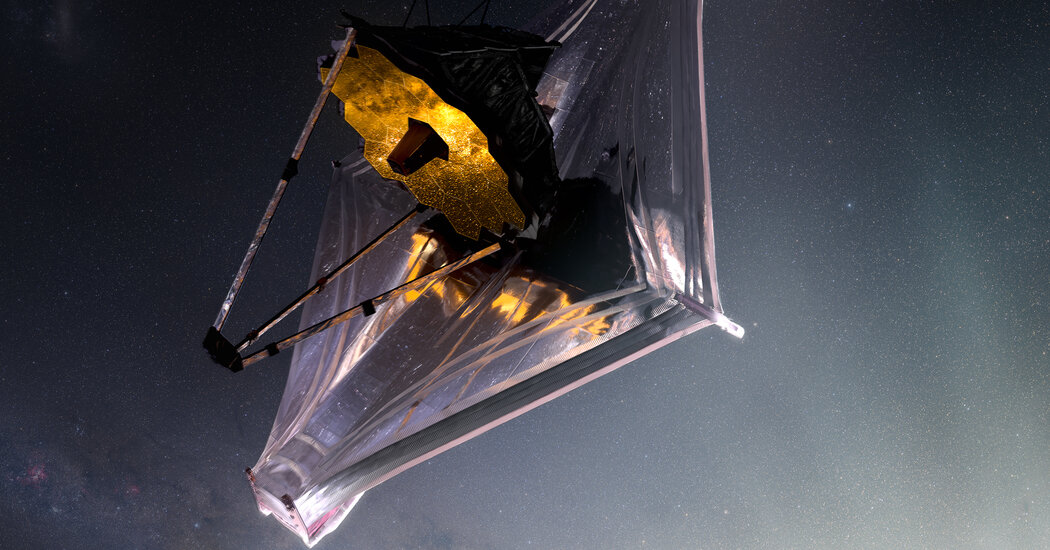 On Tuesday morning, NASA will show off the first pictures and data from the new James Webb Space Telescope. That will bring to an end some 30 years and $10 billion of planning, building, testing and innovating, followed by 6 months of terror, tension and anticipation.

The pictures constitute a sightseeing tour of the universe painted in colors no human eye has seen — the invisible rays of infrared or heat radiation. Infrared rays are blocked by the atmosphere and so can only be studied out in space. Among other things, they can penetrate the clouds of dust that encase the cosmic nurseries where stars are born, turning them into transparent bubbles that show the baby stars nesting inside.

NASA will show the pictures at 10:30 a.m. Eastern time on Tuesday in a live video stream. You can sign up here for a reminder on your personal digital calendar to catch the first glimpse of them.

Only the tiniest sliver of the world’s astronomers have already gotten a look at what the Webb has seen. But the NASA officials who were granted an early peak at the new images could only gush during a news conference in late June.

Pamela Melroy, NASA’s deputy administrator and a former astronaut, said she could hardly contain herself.

After traveling nearly one million miles to reach a location beyond the moon, the James Webb Space Telescope will spend years observing the cosmos.

“What I have seen moved me as a scientist, an engineer and a human being,” she said.

Thomas Zurbuchen, NASA’s associate administrator for science missions, compared seeing the pictures to a moment when, as a graduate student analyzing data at 2 a.m., he realized that he had discovered something about the universe that nobody else knew. It was surprisingly emotional, he said, to see nature give up its secrets.

Bill Nelson, NASA’s administrator, said, “We’re going to give humanity a new view of the cosmos,” and praised the telescope as “a good example of what government can do.”

Webb is the largest space telescope ever launched. Its mission is to explore the earliest days of the universe, when galaxies and stars were just congealing out of the fog of the Big Bang, reaching farther into time and space than the Hubble Space Telescope can. Just as the Hubble defined astronomy during the past 30 years, NASA expects that the Webb will define astronomy for a new generation of astronomers, who have been eagerly awaiting their own rendezvous with the cosmos.

“We all know that Webb will absolutely blow Hubble out of the water by going deeper and finding the earliest galaxies,” said Garth Illingworth, an astrophysicist at the University of California, Santa Cruz, who has used Hubble and other telescopes to search for distant primeval galaxies.

The telescope is the fruit of the combined effort of some 20,000 engineers, astronomers, technicians and bureaucrats, according to Bill Ochs, the telescope’s project manager. It is now orbiting the sun at a spot called L2, a million miles from Earth, where the combined gravitational fields of the moon, the Earth and the sun conspire to create a semi-stable resting spot. Its mirror consists of 18 gold-coated beryllium hexagons and looks like a sunflower — if you could see it from here — floating on the blade of a giant shovel, which is a sunscreen that keeps the telescope cold and pointing ever outward from our own star.

The pictures to be revealed on Tuesday were cherry-picked by a small team of astronomers and science outreach experts to show off the capability of the new telescope and to knock the socks off the public. They will be shown off at the Goddard Space Flight Center in Greenbelt, Md. The release of the images will be followed by a scientific seminar and a rush of professional astronomers to their computers to begin taking and analyzing their own data from scientific observations that began in June.

On Friday, NASA released a list of the five subjects of the pictures. Among them are old friends to astronomers both amateur and professional, who now get to see them in new infrared raiments.

There is the Southern Ring Nebula, a shell of gas ejected from a dying star about 2,000 light-years from here, and the Carina Nebula, a huge swirling expanse of gas and stars including some of the most massive and potentially explosive star systems in the Milky Way.

Yet another familiar astronomical scene is Stephan’s Quintet, a tight cluster of galaxies, two of which are in the act of merging, about 290 million light-years from here in the constellation Pegasus.

The team will also release a detailed spectrum of an exoplanet known as WASP-96b, a gas giant half the mass of Jupiter that circles a star 1,150 light-years from here every 3.4 days. It is way too hot and big to harbor life, but such a spectrum is the sort of detail that could reveal what is in that world’s atmosphere.

Finally, but not least, is a swath of southern sky evocatively called SMACS 0723. It is a field often visited by Hubble and other telescopes, and it includes a massive cluster of galaxies whose gravitational field acts as a lens magnifying and making visible the light from galaxies behind it and even further back in time.

Dr. Zurbuchen said this image was the deepest view yet into the past of our cosmos, showing galaxies emerging from the fog of creation almost 14 billion years ago as sparks in the night. Later images, he added, would surely look back even further.

“With this telescope it’s really hard not to break records,” Dr. Zurbuchen said.