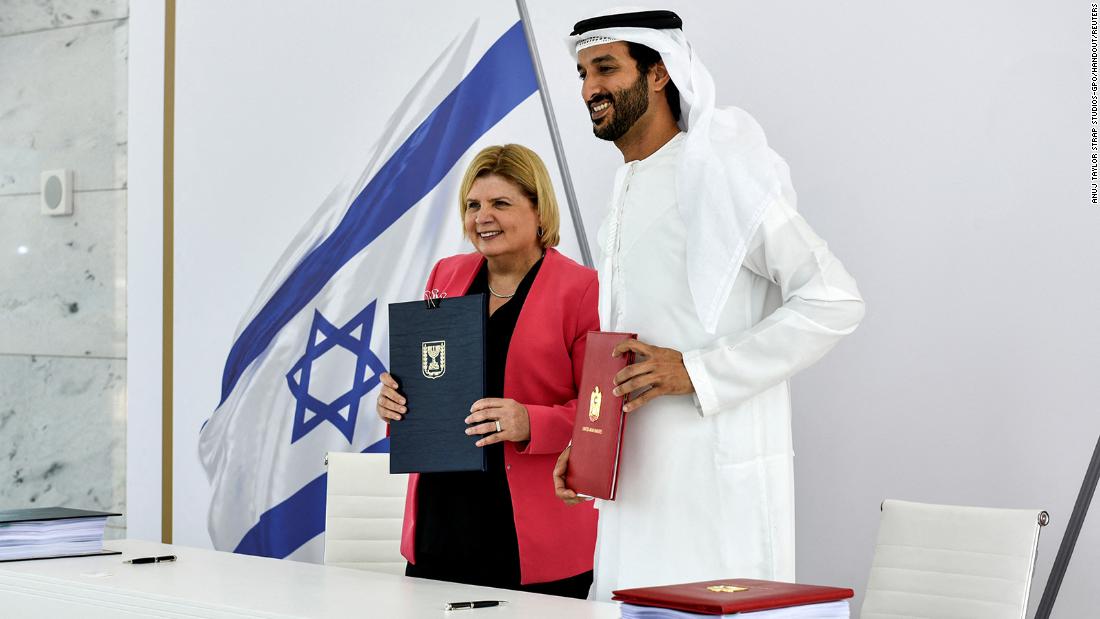 
Here’s what you need to know about the pact and UAE-Israeli trade:

What does the pact entail?

Tariffs will be removed or reduced on 96% of goods traded between the nations, including food, medicine, diamonds, jewelry, fertilizers and other chemicals.

A majority of duties would be waived immediately, and others would be removed up to five years from now. Those projects that will be subject to tariffs will be charged a lower rate.

Dorian Barak, co-president of the UAE-Israel Business Council, expects to see about 1,000 Israeli-owned companies operating from or through the UAE by the end of the year, including subsidiaries of Israeli companies, representative offices, sales operations, distributorships, and new ventures.

What does each side gain from trade?

Research provided by Paul Rivlin, an economist at Tel Aviv University, shows that the value of Israeli imports from the UAE was more than double its exports last year, but other experts say that Israel has a lot more to gain from trade with the UAE in the future.

The UAE’s exports to Israel are expected to grow 0.5% by 2030, according to state-run Emirates News Agency, WAM, and the FTA would add $1.9 billion to the nation’s economy within five years.

The UAE would see an influx of Israeli companies looking to set up regional headquarters from which to target business in the greater Middle East, South Asia and the Far East, says Barak.

Given Dubai’s status as a regional export hub, does trade with the UAE open Israeli products up to a wider market?

Israelis are looking at Dubai as a hub from which to engage with the broader Middle East, the Indian subcontinent, and the Far East, says Barak. “This would be transformational for Israeli business in the region.”

The UAE, he says, is set to become the main regional export and re-export market for Israeli goods. “I expect you’ll see Israeli products appearing on store shelves and in factories” through the region now.

Mogielnicki, however, says that Israel is a controversial player in the region, so trade with the UAE would give it a foot in the door to an untapped regional market but not “a VIP pass.”

Will we see Israeli products on Saudi shelves then?

Saudi Arabia is the biggest Arab economy and access to its market is coveted. The kingdom recognizes that leverage, experts say, and it demonstrated that last July, when it excluded Israeli products exported from the UAE from preferential tariff concessions under agreements with fellow Gulf countries.

“Saudi Arabia isn’t just going to give away its market to Israelis via Dubai,” Mogielnicki said. “The Saudis are going to want to secure something big in return for access to the Gulf’s biggest market.”

Gulf nations, with whom the UAE has free trade agreements, account for a large proportion of Dubai’s exports and re-exports.

What does this mean for the Arab boycott of Israel?

“The Arab boycott has weakened over many years and the Israel-UAE FTA is a major nail in its coffin,” says Rivlin.

Trade with the UAE may not spell the end of the Arab boycott of Israel, says Barak, but make it “irrelevant from a business perspective.”

Turkish Foreign Minister Mevlut Cavusoglu said on Tuesday that Ankara and Riyadh were in agreement for a visit by Saudi Crown Prince Mohammed bin Salman to Turkey, but no date had been set yet.

The Russian Wagner Group was linked to the use of banned landmines and booby traps in Libya between 2019 and 2020, said Human Rights Watch on Tuesday.

Russian Foreign Minister Sergei Lavrov met foreign ministers from the Gulf Cooperation Council states in Riyadh on Wednesday ahead of a meeting of oil exporting states to decide on production.

Qatar Airways CEO speaks to Becky Anderson about the country’s plan to operate more than 160 daily flights to shuttle spectators from the region for the 2022 football World Cup.

A book about gender roles in Libya has won a prestigious prize for Arabic fiction, but it has also led to some backlash against the author.

The book explores gender roles and challenges traditional ideas of masculinity. Set in a remote village in Libya, the story revolves around the main character, Milad. After getting engaged, Milad’s family life becomes the talk of the town when he pursues his passion for bread-making while his fiancé Zeinab works to support the house.

Hearing of the gossip, Milad goes on to publicly question society’s entrenched ideas around gender.

“The Libyan man is a victim of the traditional laws just like the Libyan woman, and although the women’s struggle against the social and traditional laws is clear, the men’s is not,” Alnaas told CNN. “[Men] are in a trap of their own because they always have to prove to the people that they are men, tough men, strong men. They get enslaved to that picture of the ideal man and become machines in the social order.”

The win was celebrated by Libyans across social media, but the book has also generated controversy. Alnaas laments the “campaign” about the ethics of the book that was launched on social media, noting that some of those who had congratulated him deleted their posts.

The uprising of 2011 opened the door for the consumption of once-banned books, but Ghadhafi-era laws have still been used to clamp down on freedom of expression.

Describing his view on the current landscape for Libyan literature, Alnaas told CNN “it’s struggling, however, it’s fighting back.”

The IPAF, sponsored by the Abu Dhabi Arabic Language Centre, is considered to be the most prestigious literary prize in the Arab world. Alnaas’ book will be translated into English.

Adolf Eichmann, one of the architects of Nazi Germany’s “Final Solution,” was executed 60 years ago this week in Israel.

Born in Germany in 1906, he joined the Nazi’s elite SS organization in 1932 and quickly rose through the ranks. Ten years later, he carried out a plan to exterminate all European Jews in an operation called the “final solution to the Jewish question.”

Eichmann was responsible for the identification, assembly, and transportation of millions of Jews in World War II. After Germany’s defeat, he was captured by US forces but escaped in 1946 before standing trial. He hid in Argentina until 1960, when was captured by Israeli agents in Buenos Aires in what became known as “Operation Finale.”

Eichmann was smuggled out by the Israelis to stand trial in Jerusalem. In December 1961, Eichmann was found guilty on all charges, and on June 1 of 1962, he was hanged in Tel Aviv.