Inside the Benfica Campus, one of the world’s greatest football talent factories 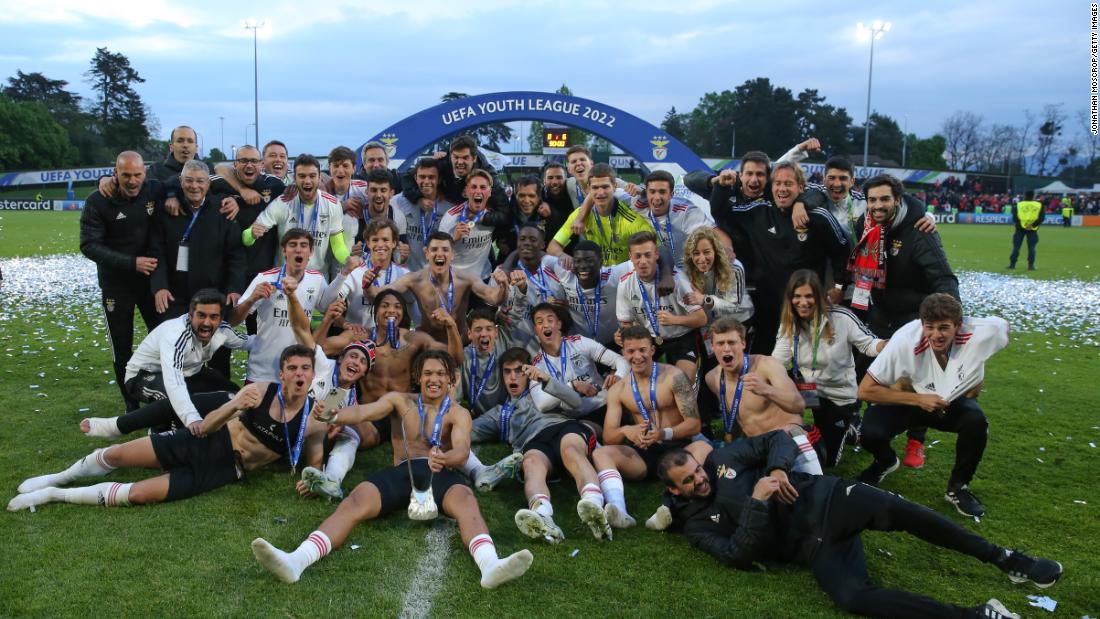 Over the years, the club’s academy — known as the Benfica Campus — has nurtured numerous stars that have gone on to command high transfer fees from Europe’s biggest clubs; Ederson, Renato Sanches, Gonçalo Guedes, Félix and Dias to name just a few.
Rodrigo Magalhães is the technical coordinator for the Campus and has been working in youth development at the club since 2005. He tells CNN Sport that Benfica’s focus on developing its youth stars as human beings before footballers is key to its success.

Around 95 players live at the academy at any one time, and when they transition from the under-18s to the under-19s, players move out into their own houses or apartments in the city.

“In our opinion, it was the age that they start to have their own lives,” Magalhães says to CNN. “Some of them have girlfriends, some of them live two or three in an apartment. So they start a life outside the academy as we need to prepare them to live their lives because we know that a small percentage of players will achieve the goal to play in the first team or in the main leagues in Europe.

“After those ages, under-19 and under-23, normally all of our players who progress [from the academy] can play in first divisions and second divisions here in Portugal or in other countries, but we need to prepare them if football fails.

“The first objective was to develop them like human beings and we need to prepare them with a strong academic development too.”

Last season, Benfica’s Campus team finally won the most coveted prize in youth club football: the UEFA Youth League. Introduced in 2013, it’s a tournament contested by all the youth teams of the clubs playing in that season’s Champions League.

After losing in all three of its previous final appearances, Benfica finally got its hands on the trophy with an eye-catching 6-0 win over RB Salzburg, a result that drew admiring glances from many of Europe’s biggest clubs.

“Everyone is so proud of that moment because it was a process that didn’t start that season,” Magalhães says. “Lots of those players started with us when they were six years old, others 10 years old, 11 years old.

READ: Why only ‘God Save The Queen’ will be played when Northern Ireland plays England at Euro 2022

“We need to look to all the people that work with them — coaches, assistant coaches, teachers, social department, scouting department — everyone here has a special part in that moment.”

Magalhães says around 90% of the squad that won the UEFA Youth League started playing at the Campus between the age groups of under-6s and under-12s.

Although Benfica has its main base in Lisbon, it also boasts five training centers around Portugal, which allow the club to scout and then nurture the best talent from across the country.

In the squad for the semifinals and finals, Magalhães says there were players from all their training centers — in the north, south and center of Portugal — a feat he is incredibly proud of as it is proof the project Benfica entrusted him with is bearing fruit.

But even if they hadn’t won the trophy last season, Magalhães would still have viewed the team’s participation as a success. In the eight seasons since the Youth League’s inception — the 2020-21 season was canceled due to the Covid pandemic — Benfica has reached four finals, a record only two-time winner Chelsea has been able to match.

“More than winning the trophy, it’s the regularity,” Magalhães says. “If we were a team that goes once in five years to a semifinal or to a final, okay, it’s good for us. But a team [with Benfica’s record] means that really we have a group of players that are able to compete at the highest level in comparison with other teams in Europe.

“For us, the regularity is a sign that our work is going well.”

With Benfica unable to rival Europe’s wealthiest clubs — like Manchester City, Real Madrid and Paris Saint-Germain — for player transfers, Magalhães knows the first team’s best route to success is through nurturing its own world-class talent.

António Silva is one of the current crop of rising stars in Benfica’s academy and was in the team for last season’s victorious UEFA Youth League campaign. The 18-year-old central defender joined Benfica in 2014 and, given his position, naturally hopes to emulate Dias’ success.

Dias joined Manchester City from Benfica for around $75 million in 2020 and immediately cemented his place among the best defenders in the Premier League. In his two seasons at City, the 25-year-old has played a crucial role in winning two Premier League titles and reaching the 2021 Champions League final.

Silva even wears the No. 66 shirt that Dias wore while he was at the club.

“I look up to Rúben a lot,” he tells CNN Sport. “He started playing here and look at all the things that he achieved at Manchester City and also in the team at Benfica. He’s a person to look up to and it’s important for me to have my references to reach the top.

“Portuguese clubs work a lot with the youth ages, so it’s important for us to have the kind of players that reach the top and play in all the leagues, in the top leagues like the Premier League and La Liga, like Nuno [Mendes] being in PSG.

“For us, it is important to have those kind of players, like idols for us to try to also complete this process and, if it is possible, do it better than them.”

Silva describes himself as a modern center back, comfortable with the ball at his feet and capable of playing long balls or passing alone the floor. As well as Dias, Silva draws his inspiration from Liverpool’s Virgil van Dijk and Real Madrid’s Antonio Rüdiger.

However, Silva knows none of the players’ personal and team success would be possible without the dedication of the hundreds of staff that work in Benfica’s bases around the country.

“Benfica has a lot of people who work for us, that give everything to us and this is the most important thing,” he explains. “Benfica Campus is important, but the people who work with us? They are more important.”