It Hides Under the Soil With a Bottomless Appetite for Meat 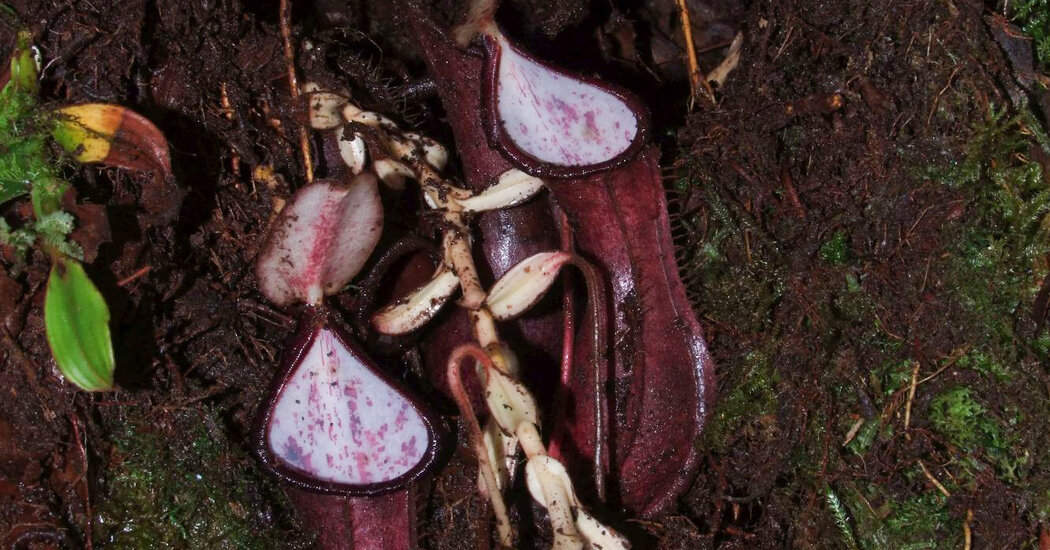 
A newly discovered pitcher plant keeps its hunger for insects on the down low: It’s the first such plant known to grow working traps underground.

Martin Dančák, a plant taxonomist, and Wewin Tjiasmanto, a naturalist, came across the covert carnivore in 2012 while hiking with colleagues in the rainforest in North Kalimantan, a province of Indonesia on the island of Borneo.

As they journeyed, with no goal except to summit a mountain, the group members came across some climbing shoots that appeared pitcherless. But the hikers were sure they belonged to Nepenthes, a group that included hundreds of pitcher plant species, known for their characteristic of pitcher-shaped traps. A careful search turned up a few pitchers dangling in the air. Then, one group member found the mother lode beneath a moss cushion at a tree’s base: a cluster of maroon pitchers strung on a white, chlorophyll-lacking shoot.

“We were, of course, astonished,” said Dr. Dančák of Palacký University Olomouc in the Czech Republic. “Nobody would expect that a pitcher plant with underground traps could exist.”

Occasionally, pitcher plants are found growing traps that are covered by leaf litter or moss, but the traps are usually not functional, said Mr. Tjiasmanto, who is also a conservationist at the nonprofit Yayasan Konservasi Biota Lahan Basah in Indonesia. This new species, Nepenthes pudica, has evolved to grow subsurface traps that are specialized to lure and catch underground insects — “a really bizarre underground meat eater,” he said.

Pitcher plants typically have upper and lower sets of pitchers. A survey of partially digested insect guts revealed that N. pudica’s traps catch quite the haul of prey, mostly ants. In five underground pitchers and an aerial one, the team found thousands of insects from dozens of species.

“Nothing is known that does anything like this with underground traps,” said Douglas Darnowski, a plant physiologist at Indiana University Southeast who was not involved with the work. The few groups of plants known for their subsurface traps catch only the tiniest of prey, often microscopic ones. N. pudica grows the largest underground traps ever discovered, up to about four inches tall. To withstand the pressure of the soil, subsurface traps grew walls that were thicker than those of the plant’s rare upper pitchers, the team reported last month in the journal PhytoKeys.

Alluding to the pitchers’ concealment, this species’ moniker, which comes from the Latin word “pudicus,” meaning bashful. But perhaps the plant is more cunning and sly. Growing pitchers underground may allow it to escape some of the fierce competition for food near the forest floor. It may also provide a wetter environment that sustains the plants, which tend to grow on relatively dry ridges.

With so many species of Nepenthes, there were probably other pitcher plants that grow underground traps, Dr. Darnowski said. “Maybe even other species that people have been looking at,” he added.

N. pudica, though, may be rather rare. So far, the team has only seen 17 of the plants on a single mountain, Dr. Dančák said, prompting the team to suggest treating the species as critically endangered, in part because of potential exploitation of forests in that part of Indonesia.

The plants might face threats from illegal logging and the expansion of oil palm plantations on Borneo, said Mr. Tjiasmanto, who founded Yayasan Konservasi Biota Lahan Basah with a group of friends to buy up small parcels of land that are rich in biodiversity. Pitcher plants are also popular with plant hobbyists and, for many species, poaching may pose a greater threat than deforestation does. Some other Indonesian species have been poached to near extinction, mostly to satisfy the demands of overseas collectors.

The Bornean tropical rainforest where N. pudica lives is one of the world’s most rapidly vanishing ecosystems, Dr. Dančák said. “With every hectare of this forest, we might lose unknown organisms forever. Organisms that have lived here for millennia.”