Leaving locked down Shanghai for a ‘whole new world’ outside China 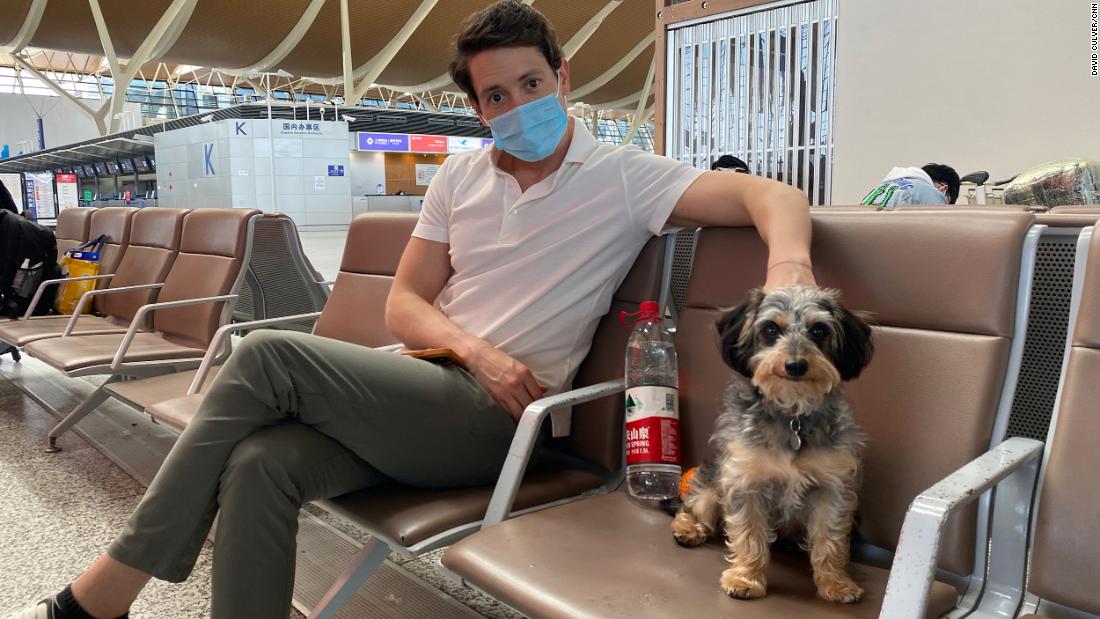 Our plane had just taken off from Shanghai, a city of gleaming high-rises, home to 25 million people who are slowly being worn down by China’s unrelenting zero-Covid regime.

As she approached my row, the flight attendant addressed me with the same concerned tone. “You got out with this little guy, I see,” she said, glancing at my rescue dog, Chairman, asleep in his carry case under the seat in front me. “How did you do it? And how are you feeling?” she asked.

Right now, expats who want to escape Shanghai typically need consular assistance, approval from community leaders to get extra non-government Covid tests, a registered driver to take them to the airport, and a ticket on a rare flight out (and that’s even harder to find with a pet).

But most of all, people leaving must promise their community leaders that once they step through the gates, they won’t come back.

After 50 days of being locked inside, I could feel my neighbors peering at me from their homes as I left my apartment. They likely assumed I was either being bused off to a government quarantine center like people who had tested positive, or had found a quick escape route like other expats trying to get out.

In fact, my trip had been planned for several months, well before the start of the maddening lockdown. After covering the initial outbreak in Wuhan in January 2020, I stayed in China as it shut itself off from the rest of the world. But after more than two-and-a-half years away from my close-knit Cuban-American family, I needed to get back.

The commute from Xuhui district in central Shanghai to Pudong International Airport to the east of downtown was nothing like I remembered. Tape lined near-desolate sidewalks, and most stores and restaurants were closed, their shutters down and doors secured with chains and locks.

The few people out on the streets were mostly dressed in hazmat suits, police included. Checkpoints lined the route to the airport, and when my driver was stopped, officers spent several minutes inspecting our documents: flight confirmation emails, negative Covid tests, even a letter from the US Embassy.

As we pulled up outside the terminal, I realized there were no other cars or passengers in sight — and for a fleeting second I feared my flight had been canceled.

The China I’m leaving bears little resemblance to the one that welcomed me almost three years ago — but it does remind me of the first major story I covered here.

Months after arriving, my team was sent to Wuhan in central China after word started spreading about a mystery illness. That was January 21, 2020, and within days the city went into an unprecedented citywide lockdown — the first of many worldwide.

We, along with many others, scrambled to get out, but realizing we could potentially be exposed, we decided to self-isolate in a hotel for 14 days, before quarantining became mandatory.

In those early days, a brief window of unfiltered truth opened before Chinese censors shut it down. During that time, we spoke with victims’ relatives, who risked their freedoms to express their anger toward government officials they say mishandled and covered up the initial outbreak.

Chinese officials maintain they were transparent from the start. And just this month, President Xi Jinping reaffirmed and praised his country’s zero-Covid efforts, vowing to fight with any doubters and critics of the increasingly controversial policy.

China was one of the first countries to shut its borders, build field hospitals, roll out mass testing of millions of people, and create a sophisticated contact tracing system to track and contain cases — providing a template for other countries as they fought their own outbreaks.

And for a time, it worked. Even as cases surged around the world, China remained relatively Covid-free, and this year took its pandemic measures to another level, hosting the Olympic Games under the tightest health security apparatus ever staged for a global event.

Reporting in China was notoriously difficult even before Covid, but pandemic restrictions meant that every assignment came with the threat of being trapped in a snap lockdown or forced into quarantine.

China’s battle against Covid coincided with worsening international relations, particularly its ties with the US. American journalists, like me, were slapped with heavy visa restrictions — visa periods were shorter and multi-entry access was scrapped. So rather than risk being locked out of China, many of us stayed.

Taking off from lockdown

Stepping into the airport’s eerily quiet Terminal 2 was like advancing to the next level of a video game — a moment of relief overshadowed by anxiety that some kind of unexpected hurdle could take me back to where I started.

The departures board listed only two destinations: Hong Kong and my destination, Amsterdam.

No shops or restaurants were open, even the vending machines had stopped working. In the far corners of the massive terminal building, departed travelers had left behind sleeping bags and piles of trash. Some were still there, waiting for what I had — a flight out.

At the check-in desk, passengers left queues of trolleys piled high with luggage as they waited hours for attendants to appear in white hazmat suits to check them in.

By the time I passed customs and security, the sun was setting on the dimly-lit terminal. Other passengers, mostly expats, huddled nearby, waiting to board, sharing similar stories.

“We’re leaving after 5 years,” one woman said. “We’ve been here 7 (years),” another passenger responded, pointing out another couple: “They’ve lived here about a decade.”

The folks I spoke with seemed to have reached the same conclusion: the time they had invested in China’s financial hub no longer mattered. It was time to pull out, cut your losses.

From the window, I could see our plane at the gate and watched ground crew in hazmats spray each other with disinfectant, sanitizing from their heads to the soles of their shoes after loading the last of our luggage.

When I finally settled in my seat — with entire rows around me empty — weeks of built-up adrenaline, anxiety and stress began to ease. For the first time perhaps since the start of the outbreak in March, I felt a sense of relief and certainty, though it was tinged with survivor’s guilt as the plane took off.

The flight attendants were seemingly fascinated by each passenger’s “escape story” and remarked how they’ve never had a flight with so many grateful people on board.

Two of them approached my seat as we reached cruising altitude. One of them said, “You all have had a long few weeks, why don’t you get some rest. We’ll have you home soon.”

The other nodded in agreement, and then pointing to her face mask said, “Oh, and just so you’re not too shocked, once we land you’ll hardly notice anyone wearing these anymore.”

“You’re about to enter a whole new world.”