Marcos Jr. asks world not to judge him by his family’s past as he claims victory in Philippines election 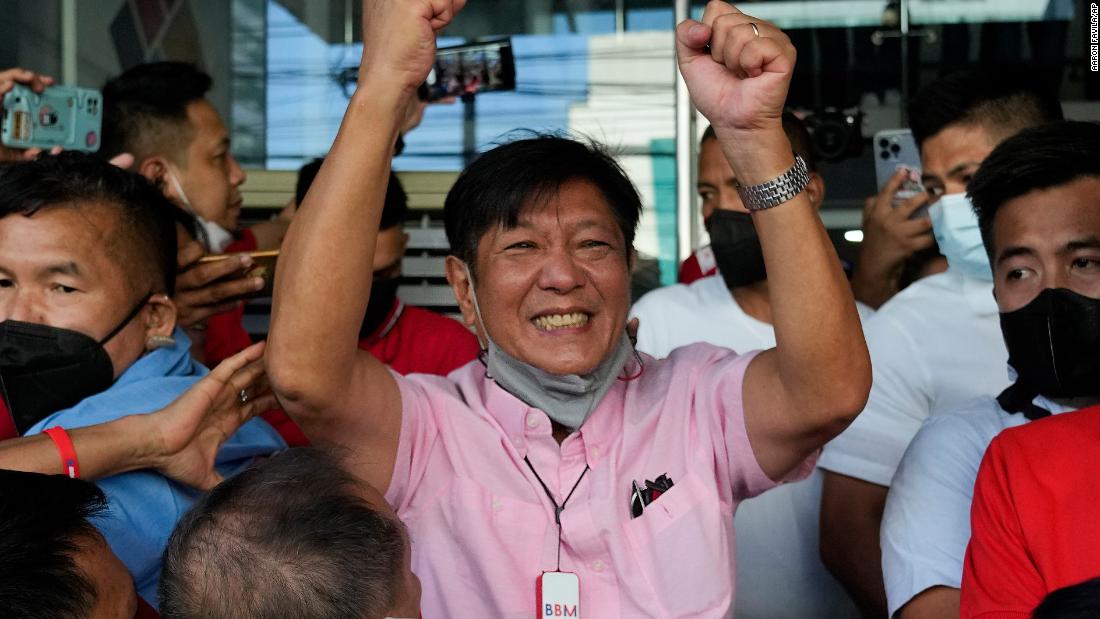 Known as “Bongbong” in the Philippines, Marcos Jr., who is the son and namesake of the late dictator, promised to be a “President for all Filipinos,” said Victor Rodriguez, his chief of staff and spokesperson.

With 98% of the votes counted, Marcos Jr. received 31 million votes compared to his closest rival, the outgoing Vice President Leni Robredo, who got about 14 million, partial and unofficial results showed.

“In historic numbers, the people have used their democratic vote to unite our nation,” the statement said. “This is a victory for all Filipinos, and for democracy. To those who voted for Bongbong, and those who did not, it is his promise to be a President for all Filipinos. To seek common ground across political divides, and to work together to unite the nation.”

Marcos Jr. campaigned on a platform of “unity,” promising more jobs, lower prices and more investment in agriculture and infrastructure.

Speaking at a post-election media briefing, Marcos Jr. said his intention was “to hit the ground running,” adding that choosing a team to manage the economy would be among the crucial first steps.

“As you can imagine, the economic managers are going to be critical for the next several years because of the pandemic and economic crisis, something that we are looking at very carefully,” he said.

The victory, if confirmed, would see the Marcos family return to power more than 30 years after they were forced to flee the country in disgrace following a People Power revolution that toppled the regime of Marcos Sr. in 1986. Marcos Sr., whose 21-year rule was marked by human rights abuses and widespread corruption, died in exile in Hawaii three years later, but his family returned to the Philippines in 1991 and became wealthy, influential politicians, with successive family members representing their dynastic stronghold of Ilocos Norte.
Analysts say Marcos Jr.’s rise is the culmination of a decades-long attempt to rebrand the Marcos family’s name and image, most recently through a supercharged social media campaign.

Despite tying his campaign to his father’s legacy with the slogan “rise again,” Marcos Jr. has asked the world to judge him by his actions, not by his family’s past.

“To the world, he says: Judge me not by my ancestors, but by my actions,” Rodriguez said in the statement.

Robredo, who has said she won’t concede until election irregularities are checked, urged her supporters to accept the results of the May 9 election.

“Whatever the results will be, let us accept it because this will bring out a bigger strength that could unite us,” said Robredo during a thanksgiving mass in the Naga Metropolitan Cathedral, according to CNN Philippines.

She has announced a gathering for her supporters on May 13.

Hundreds of protesters, including students and members of progressive groups, gathered outside the Philippines election commission in the capital Manila on Tuesday, holding banners and chanting slogans in protest against Marcos and what they said were election irregularities.

Critics of Marcos Jr. are angry at what they say is a whitewashing of Philippines history and an attempt by the Marcos family to rewrite the abuses and corruption committed during his father’s dictatorship.

Tens of thousands of people were imprisoned, tortured or killed during the martial law period from 1972 to 1981 under Marcos Sr., according to human rights groups. The Philippines’ Presidential Commission on Good Governance (PCGG), tasked with recovering the family’s ill-gotten wealth, estimates about $10 billion was stolen from the Filipino people. Dozens of cases are still active.

The Marcos family has repeatedly denied abuses under martial law and using state funds for their personal use. Campaigners say the Marcoses were never held fully accountable and victims of martial law are still fighting for justice.

While many of his policies are unclear, Marcos Jr. is expected to continue Duterte’s policies on infrastructure and his controversial “war on drugs.”

Partial and unofficial results show Duterte Carpio will win the vice presidency, elected in a separate race from the presidency, in a landslide.

On Wednesday, Marcos Jr. said he would appoint Duterte Carpio as education secretary, saying she is a “mother who wants to make sure that her children are well-trained and well-educated and that’s the best motivation we can hope for.”

Her appointment would need to be confirmed by the country’s Commission on Appointments.