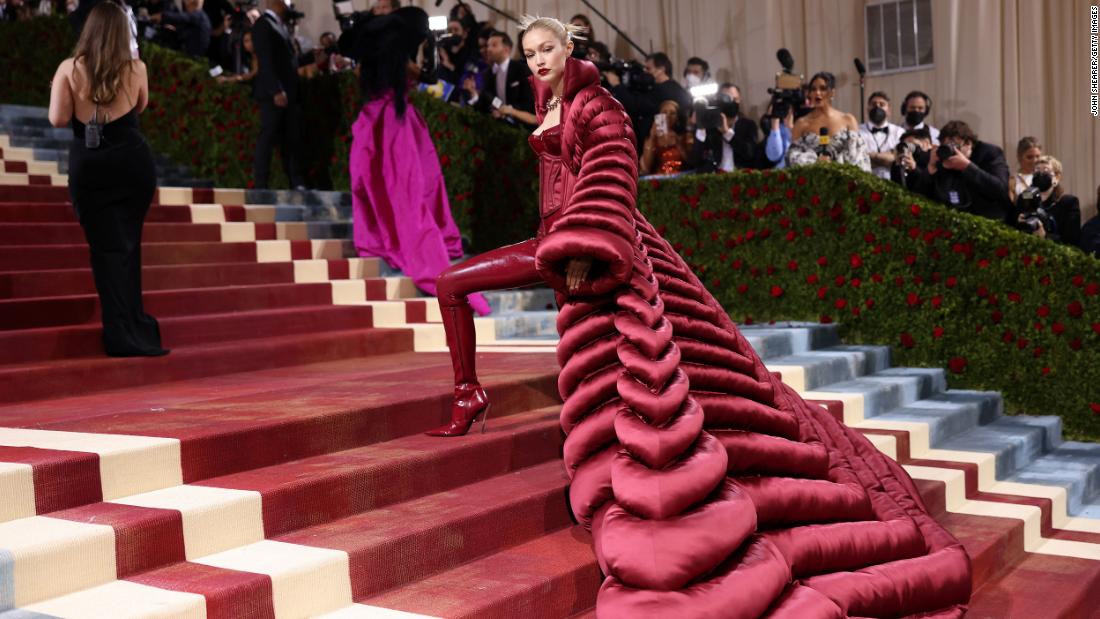 
The Met Gala is fashion’s big night out — and celebrities are known for saving their most striking outfits for its often-theatrical red carpet.

Stars across industries including TV, film, politics and sport did not disappoint, bringing exaggerated silhouettes, elegant accessories and moments of drama to the Metropolitan Museum of Art on Monday evening.

Pandemic-related rescheduling meant it had been less than eight months since the (normally) annual fundraiser was last held, giving designers less time to think about the event’s dress code, “Gilded Glamour and White Tie.” The theme continued 2021’s exploration of American style — in keeping with the Costume Institute’s accompanying two-part exhibition, “In America: An Anthology of Fashion” — and many attendees took direct inspiration from the Gilded Age, an era that saw America transformed at the end of the 19th century.

At a press event before the gala, First Lady Jill Biden used her opening remarks to emphasize American design’s “rich and deep” history.

“It is a story of innovation and ingenuity, of rebellion and renewal,” she said. “It has often been written by those in the shadows, not recognized for their influence and art, but here at the Met their stories are told.”

Several guests chose to pay homage to the historical theme with vintage jewelry. Actress Tommy Dorfman, YouTuber Emma Chamberlain and Vogue magazine’s Anna Wintour and Hamish Bowles were among the celebrities who accessorized with vintage tiaras.
Gala co-host Blake Lively meanwhile paid tribute to New York City’s Gilded Age architecture. With the assistance of several helpers, she undid the enormous bow of her shimmering Versace gown on the steps of Met, unveiling a hidden train in an aged copper color inspired by the patina of the Statue of Liberty.
Prior to Monday evening’s red carpet, one of the quintessential American designers, Tommy Hilfiger told CNN that the event offered designers a chance to “showcase their unique interpretations of fashion and pop culture. “The Met Gala is all about having an open mind and thinking outside the box,” said Hilfiger, whose work features in the Met’s new exhibition, via email.
Former Yeezy designer Maisie Schloss, who now runs her own LA-based label Maisie Wilen, said the fundraiser’s combination of high fashion and mainstream appeal makes it a “unique” red carpet.

“The events embraced by industry insiders and the masses alike allow for peak creativity,” she said via email.

Scroll down to see some of the event’s best fashion.

Billie Eilish stunned in an upcycled Gucci dress with a corseted bodice and sheer sea-foam-hued gloved sleeves. Every part of the dress was made from “already existing materials” she said, nodding to its eco-friendly design. Credit: Evan Agostini/Invision/AP

Actors Blake Lively and Ryan Reynolds embraced the theme, with Lively in a glittering Versace beaded gown with an oversized coppery satin bow and matching gloves, and Reynolds in a classic tuxedo. Credit: Theo Wargo/WireImage/Getty Images

Actor Louisa Jacobson is no stranger to tonight’s theme. She was in HBO show “The Gilded Age,” which premiered earlier this year. Credit: John Shearer/Getty Images

With her outfit and jewelry both designed by Louis Vuitton, actress Gemma Chan arrived in a crystal-embellished leather cape and a dress with theatrically exaggerated hips. Credit: Mike Coppola/Getty Images

Rapper Cardi B turned to Versace for this chain-embellished dress, which was made from a mile of golden chains according to the brand. Credit: Dimitrios Kambouris/Getty Images for The Met Museum/Vogue

While many celebrities opted for tiaras, singer Janelle Monáe went for a full glimmering gown with a full blinged-out headpiece and matching wrist cuffs. Credit: Dimitrios Kambouris/Getty Images for The Met Museum/Vogue

Winnie Harlow and Teyana Taylor dazzled in Iris van Herpen ensembles and headpieces. Harlow opted for a black-and-white sculptural dress, while Taylor wore a gauzy purple gown. Taylor told Vogue on the red carpet that it was a “futuristic” take on the “Gilded Glamour” theme but also like the villain Ursula from “The Little Mermaid.” Credit: Theo Wargo/WireImage/Getty Images

Hillary Clinton wore a custom Joseph Altuzarra design featuring the embroidered names of 60 women who inspire her, from Rosa Parks to her own mother. Credit: Jamie McCarthy/Getty Images

Quannah Chasinghorse wore Indigenous jewelry that holds significance to her community. “Being welcome the way I am is beautiful… but it should have happened a long time ago,” she told reporters on the red carpet. Credit: Jamie McCarthy/Getty Images

Vogue’s Anna Wintour chose Chanel haute couture by Virginie Viard for the evening, but her outfit has a personal touch: a tiara from 1910 that’s a family heirloom. Credit: Evan Agostini/Invision/AP

Cynthia Erivo swept down the red carpet in a white lace Louis Vuitton gown with a ruffled skirt, alongside a white headwrap and a golden necklace. Credit: Evan Agostini/Invision/AP

Designer Tom Ford naturally wore an outfit by his own brand, choosing a white-tie suit for the event. Credit: Jamie McCarthy/Getty Images

Vanessa Nadal in Oscar de la Renta and Lin-Manuel Miranda in a suit by Paul Tazewell, the costume designer for the Broadway show “Hamilton.” Credit: Dimitrios Kambouris/Getty Images for The Met Museum

West Side Story star Ariana DeBose added a dose of glamour to her black and golden Moschino outfit with a pair of opera gloves and jewelry inspired by her gown’s swirling motif. Credit: Angela Weiss/AFP/Getty Images

Fashion editor Hamish Bowles wearing Ralph Lauren and a tiara. He told CNN that in his opinion, “the second Gilded Age of New York was the ’80s.” Credit: Mike Coppola/Getty Images

Top image: Gigi Hadid, whose all-red Versace outfit was completed with an outsized puffy coat that trailed behind her on the steps of the Met. (John Shearer/Getty Images)