Moth Species Not Seen Since 1912 Was Intercepted at Detroit Airport 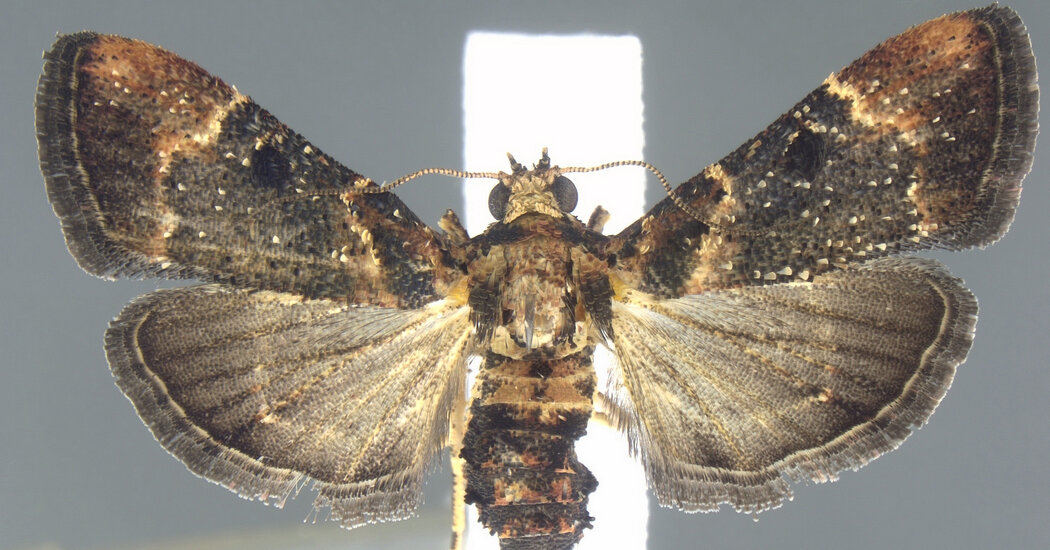 
Customs agents at Detroit Metropolitan Airport who were checking the baggage of a passenger traveling from the Philippines found something just around half an inch in size that piqued their interest.

The objects in question — the larvae and pupae of an unidentifiable insect — were inside seed pods that the passenger said were intended for medicinal tea. Later, scientific tests showed that the agents had homed in on a potentially grave threat to the nation’s agriculture and natural habitats.

U.S. Customs and Border Protection announced last week that the pupae had hatched a species of moth whose last recorded sighting by scientists occurred in 1912 in Sri Lanka. Experts confirmed that such nonnative insects had the potential to defoliate forests and feast on or contaminate crops.

The moths, whose black-and-gold dotted wings resemble a cloudy predawn sky, were discovered in September and looked to be a member of the moth family Pyralidae, the customs officials said. To determine their exact species, the authorities sent the specimens to an expert at the Smithsonian Institution, according to the announcement.

The species of moth was Salma brachyscopalis Hampson, named for the British entomologist George Hampson, according to Jason Dombroskie, a lepidopterist at the Insect Diagnostic Lab at Cornell who specializes in identifying moth species. Mr. Dombroskie said in a telephone interview that he had trained one of the Detroit airport agriculture specialists in moth taxonomy and that the specialist had told him about the discovery.

Mr. Dombroskie and David Moskowitz — an entomologist, environmental consultant and co-founder of National Moth Week, an annual event that encourages people to observe moths in backyards and parks — said it was unlikely that the moth had been smuggled into the country. They said that the species was too obscure to possess the medicinal or aesthetic value that motivates smugglers.

But both experts emphasized the danger that the species might have posed, given the destructiveness of other nonnative insects.

For example, the spongy moth (until recently known as the gypsy moth) has become a tree-devouring pest responsible for hundreds of millions of dollars in damage and mitigation efforts annually, according to the Entomological Society of America.

And scientists have feared that the emerald ash borer, an Asian beetle, has the potential to kill 99 percent of the nation’s ash trees.

“The emerald ash borer originated in Detroit,” Mr. Dombroskie said. “If we’d had an agricultural inspector that identified that early on, we could have prevented all that.

“Would this moth have become the next multibillion-dollar pest?” he asked, referring to the species found by the customs agents. “Probably not — but it’s possible.”

The identification of such tiny but potentially devastating larvae was “improbable,” Mr. Dombroskie said.

“There’s only so much you can know,” he added. “A botanist might not have made this discovery, or a mycologist,” someone who works with fungi like molds and mushrooms.

Mr. Moskowitz said the episode illustrated the importance of training in animal taxonomy for customs agents.

“Identifying a moth that hadn’t been found in more than a century took great expertise,” he wrote in an email. “Without that, we lose the ability to know what is around us, how we might be able to protect and conserve species at risk and against invaders.”