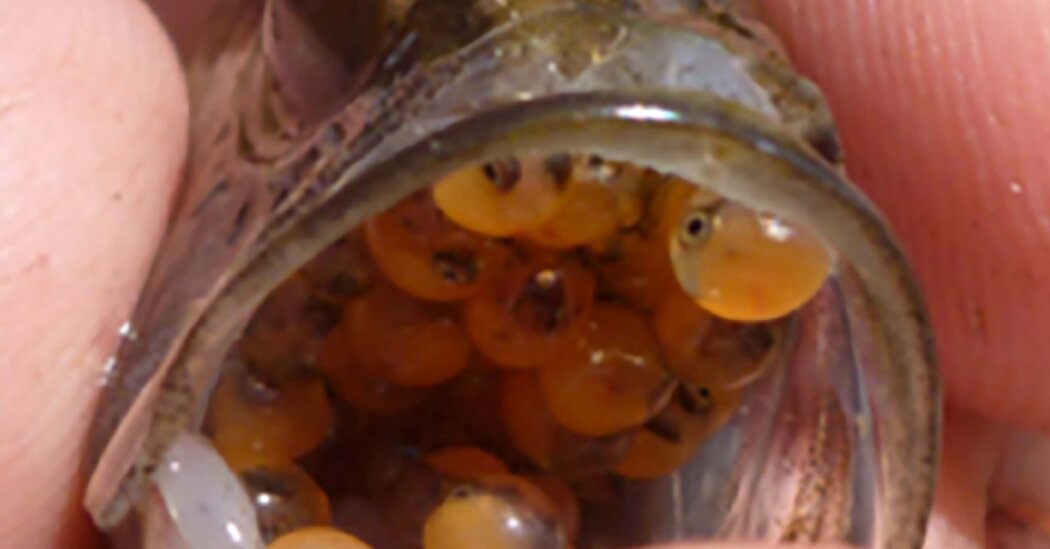 
Lurking among the underwater plants in Australia’s ponds and streams is a fish called the mouth almighty. The species is named for its impressive jaws, which snap up passing prey. But the males also use their almighty mouths to gently carry as many as hundreds of babies.

The dads do this oral caretaking, called mouthbrooding, for two or three weeks at a time. Like other mouthbrooding fish, they do so at great personal cost. Yet, according to a study published Wednesday in the journal Biology Letters, mouth almighty fathers sometimes carry babies that aren’t their own.

The study’s lead author, Janine Abecia, is a Ph.D. candidate at Charles Darwin University in Northern Territory, Australia, where she’s been studying the mouth almighty, or Glossamia aprion, as well as the blue catfish Neoarius graeffei. Both live in the freshwater environments of Australia. Fathers of both species scoop fertilized eggs into their mouths and carry them until after the young have hatched.

Her research has suggested that these two species don’t eat at all when they’re on dad duty: “I opened up the stomachs of mouth brooders, and they were empty,” Mrs. Abecia said.

Research in other kinds of mouthbrooders — which can be fathers or mothers, depending on the species — has shown that they don’t eat, either. Having a mouth stuffed with offspring may also make it difficult to breathe. And it seems to slow down the parent, potentially making it harder to escape predators, Mrs. Abecia said.

Given the costs, it makes evolutionary sense that fish parents would only engage in oral caretaking for babies they’re certain are their own. Yet scientists don’t know how often this is true. “It’s actually a question I’ve long been interested in,” Dr. Wilson said.

Mrs. Abecia collected mouthbrooding fathers of both the mouth almighty and blue catfish from rivers in the Northern Territory. She collected additional adult fish, with no young in their mouths, for genetic comparison. Then she selected about 10 eggs or babies from each father’s mouth and analyzed their DNA to figure out where they’d come from.

With the blue catfish, things were as expected. All nine dads seemed to be carrying their own young, and those baby fish all had the same mother.

Inside the powerful jaws of the mouth almighty, though, things were a little weird. The mouth almighty species forms seemingly faithful pairs in the lab, Mrs. Abecia said. Yet out of 15 batches of young that she studied from the wild, four didn’t quite fit with this story.

Two batches of young had multiple mothers, suggesting that the male had courted a female while he already had eggs in his mouth. One batch had multiple fathers, maybe because another male had sneakily fertilized some eggs before the brooding dad fertilized them and slurped them up. And in one batch, the young were totally unrelated to the fish that was carrying them.

“It’s a very small study,” Dr. Wilson said, so it would be “premature” to draw conclusions about how common these duped dads are. He noted that even though the blue catfish in this study seemed monogamous, there might have been hanky-panky that the researchers’ sample didn’t catch. “Personally, I’d like to see more data,” he said.

But, he added, the genetic techniques used in this study are making it easier for scientists to ask these kinds of questions about the private lives of apparently monogamous animals. “Stories such as this are probably just the start of understanding what complexities exist in nature,” he said.

Scientists have already discovered other mouthbrooding fish carrying the wrong babies. In one type of cardinalfish, about 8 percent of broods included a second dad’s young. A study of fish called silver arowanas found that out of 14 brooding dads, two had mouths full of offspring that were totally unrelated.

For their efforts, these dads will pass down none of their genes. Why hasn’t evolution made them more careful?

One possibility is that a mouth full of baby fish makes them seem sexy.

“Some female fishes in other species are attracted to males that are already caring for their young,” Mrs. Abecia said. Males that get stuck with the wrong babies now could make up for it later; maybe even more females will be eager to fill those males’ scaly jaws with eggs.

“It shows that it’s not only the females that go to great lengths in caring for their offspring,” Mrs. Abecia said. “In a way, it’s inspiring.”