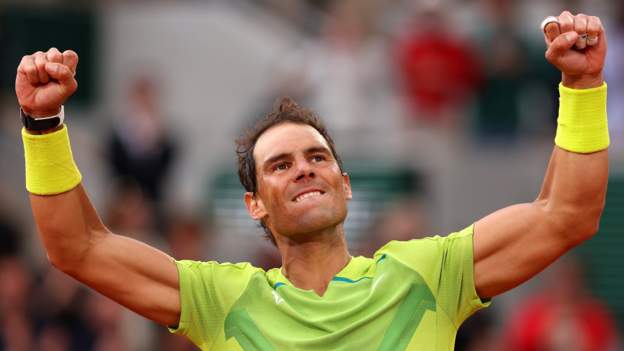 Third seed Alexander Zverev is also in the last eight despite a patchy display against Bernabe Zapata Mirralles.

But it is the blockbuster meeting between two of the sport’s greats that will be the greatest draw of the next round when they meet for a men’s record 59th time.

Fifth seed Nadal fixed up the encounter by beating ninth seed Auger-Aliassime for his 109th win in 112 matches at the French Open.

The 13-time champion looked in serious danger of suffering his earliest exit at Roland Garros since 2009 when 21-year-old Auger-Aliassime showed quality and composure to force a fifth set on Court Philippe Chatrier.

It was only the third time Nadal had been taken to a decider on the Paris clay.

In front of a captivated crowd, Nadal demonstrated yet again why he is so special on the court where he has enjoyed the greatest successes of his career.

Nadal found an extra level when it mattered and used all of his experience to maintain clarity of thought in the decisive moments.

At 4-3 in the decider, he stretched to knock a forehand winner down the line for two break points and converted the second by scampering forward to push in a backhand.

As he prepared to serve for the win, Nadal’s name was chanted around Chatrier and he clinched victory – after almost four and a half hours – on his first match point with some deft touches at the net.

“It was a very important victory for me without a doubt,” said Nadal, who has never lost before the fourth round at Roland Garros.

“I didn’t start the match well, I had a lot of opportunities to break but I couldn’t convert. After coming back in the next two, I finished the third much better.

“I’m very happy with the attitude at the end because I was able to play more aggressive and go more to the net. That made a difference without a doubt.”

An interesting subplot to the match was the presence of Nadal’s uncle Toni, who now coaches Auger-Aliassime.

When he started working with Auger-Aliassime last year, the 61-year-old said would not be able to sit on court with the rest of the Canadian’s team in any match against his nephew.

Instead, Toni took a seat in the front row behind the baseline on Chatrier and saw Auger-Aliassime take advantage of a slow start by Nadal, who uncharacteristically made a series of unforced errors.

Those mistakes were reduced by Nadal in the second set and then he piled relentless pressure on to Auger-Aliassime’s serve in the third.

Most inside Chatrier expected Nadal to go on and win the match in four sets at that point.

But Auger-Aliassime had other ideas and forced a deciding set for which Toni Nadal did not stay as the drama escalated to the thrilling conclusion.

Two-time champion Djokovic came into the French Open having played fewer tournaments than usual this year but is showing signs of peaking at exactly the right time.

Schwartzman, a 2020 semi-finalist, was supposed to be Djokovic’s toughest test so far.

But Djokovic, 35, saw off the diminutive Argentine in a professional display that was less comfortable than the scoreline suggested.

Djokovic was deported from Australia and not allowed to play at the year’s opening Grand Slam event, then banned from entering the United States to play at Indian Wells and Miami, because he was not vaccinated against Covid-19.

After an early exit on his competitive return at Monte Carlo, he has continued to improve since and came into the clay-court Grand Slam on the back of winning the Italian Open in Rome.

Despite his status as one the sport’s all-time greats, Djokovic does not seem to enjoy the same amount of love at Roland Garros as Nadal or Switzerland’s Roger Federer and a few boos were heard as walked on to court to face Schwartzman.

Schwartzman was backed by a noisy crowd on Court Suzanne Lenglen, the second show court in Paris, and thrived off the energy in the opening stages.

Djokovic had to defend well to hold in his first service game and then broke in the next before rattling off three more games for the opening set.

Support continued to be vociferously in favour of Schwartzman, leaving Djokovic ironically nodding his ‘approval’ as he trailed 3-0 at the start of the second set.

Momentum quickly shifted back and a trademark roar from Djokovic, who seemed to be using the crowd’s support of Schwartzman as added motivation, marked the moment he levelled at 3-3.

Three more games capped a superb turnaround and, after a tight start to the third set, Djokovic broke for a 4-2 lead that enabled him to extend his 100% record over Schwartzman to a seventh match.

In contrast to Djokovic’s dominant display, Zverev just about produced enough quality amid an often error-strewn performance to end the run of unseeded Spaniard Zapata Miralles with a 7-6 (13-11) 7-5 6-3 win.

The 25-year-old German will next face the winner of Sunday’s night session encounter between Spanish teenager Carlos Alcaraz and Karen Khachanov.

The straight-set scoreline slightly flattered the German, who hit 63 unforced errors and eight double faults but came good on the majority of the match’s big moments, hitting 34 winners to his opponent’s 13.

Ultimately, his superb conversion rate of taking eight of nine break-point opportunities proved the difference, particularly in a marathon 62-minute first set that Zverev edged 13-11 on a tie-break.

World number 131 Zapata Miralles, who had won only one Grand Slam match before this tournament, twice edged ahead with service breaks in the second set but lost five of seven games from 4-2 up.