NASA Shows Webb’s View of Something Closer to Home: Jupiter 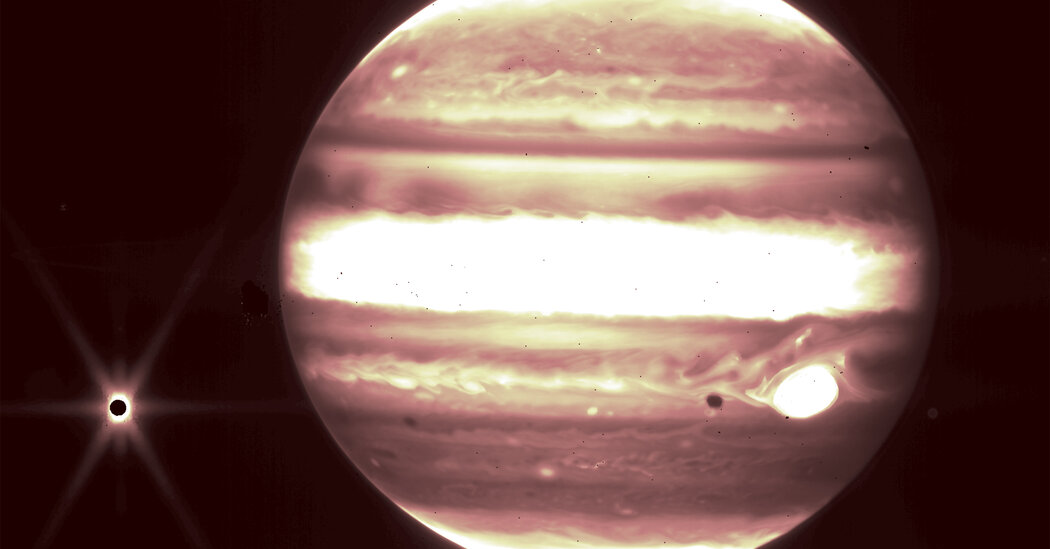 
The new James Webb Space Telescope can capture photographs not only of galaxies across the universe, but also of objects in our celestial backyard.

NASA on Thursday released images of Jupiter, the largest planet in our solar system, which is currently just 430 million miles away from Earth. (By comparison, the light of a galaxy in the “deep field” image released earlier this week had to travel close to 80 trillion miles to get to us.)

“We are over the moon (pun intended) seeing what the JWST engineering data have shown for solar system science,” Heidi B. Hammel, vice president for science at the Association of Universities for Research in Astronomy, wrote in an email.

With its 21-foot-wide mirror, the Webb telescope can pick out fine details of Jupiter and its large moons. The telescope’s instruments gather light at infrared wavelengths — redder than visible light — which provides a different view than what the more than 30-year-old Hubble Space Telescope has provided.

“I couldn’t believe that we saw everything so clearly, and how bright they were,” Stefanie Milam, Webb’s deputy project scientist for planetary science, said in a NASA blog post.

Michael H. Wong, an astronomer at the University of California, Berkeley, is leading Hubble observations of Jupiter near the end of the month and participating in near-simultaneous Webb observations. Dr. Wong said he was particularly excited for the Webb measurements of infrared light of wavelengths around three microns, which cannot be observed from ground-based telescopes because Earth’s atmosphere absorbs much of the infrared spectrum.

“These wavelengths can only be observed from space, but they have some key spectral signatures telling us what Jupiter’s cloud particles are made of,” Dr. Wong said.

To make observations of objects within the solar system, the Webb has to be able to track them as they move relative to much more distant stars. The telescope was designed so that it could track Mars, which moves as fast as 30 milliarcseconds per second across the night sky. During testing, the Webb team looked at various asteroids and found that it could still make good science observations on objects moving more than twice as quickly, up to 67 milliarcseconds per second.

That’s a pace roughly equivalent to watching a turtle crawling from a one-mile distance, NASA said.

Dr. Hammel, who is an interdisciplinary scientist on the Webb team, said her planned observations include searches for mysterious, intermittent plumes of methane at Mars and looking for water plumes at Europa and Enceladus, an icy ocean moon of Saturn. She also hopes to study the atmospheres of Uranus and Neptune.

“The images so far are just whetting our appetite,” she said. “We can’t wait for the science to start.”

Out on a spacewalk with Nasa astronauts