NASA Will Move Its Moon Rocket Off Launchpad for Repairs 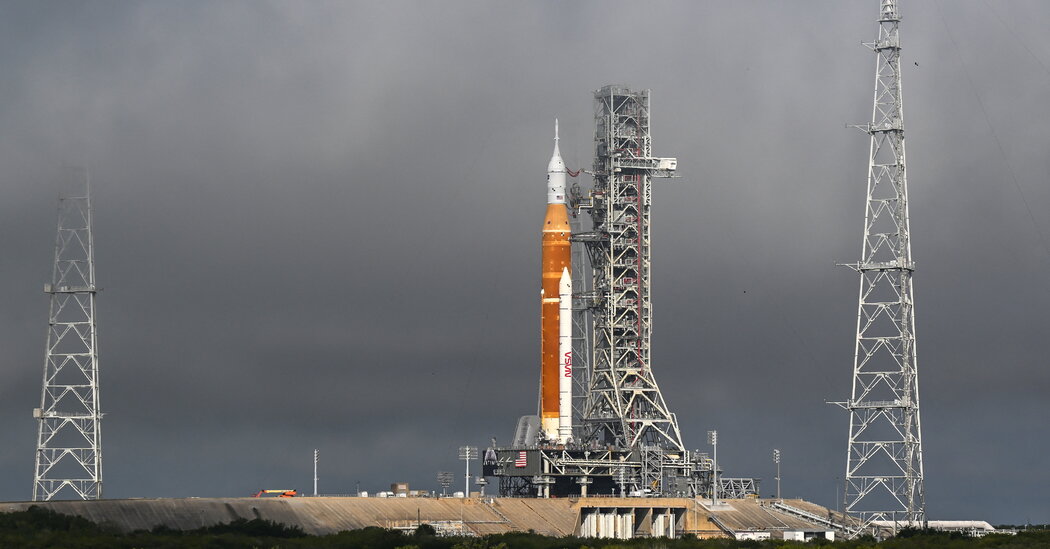 
NASA’s new big moon rocket is headed back to the garage for a few small repairs, possibly pushing back its maiden launch to late summer or later.

That means NASA is giving up, for now, trying to complete what it calls a wet dress rehearsal for the rocket — a detailed practice of the countdown that is called “wet” because it includes loading more than 700,000 gallons of ultracold liquid hydrogen and liquid oxygen into the rocket’s propellant tanks.

For the past month, the rocket, called the Space Launch System, has sat on the launchpad at the Kennedy Space Center in Florida undergoing testing of the ground systems. The tests were to culminate in the wet dress rehearsal.

However, three tries at conducting that exercise all ended early because of a variety of technical glitches during the countdowns. The purpose of the rehearsal with a new rocket system is to identify and fix such issues.

Technicians also discovered that a valve on the upper stage was malfunctioning, and for the third rehearsal try last Thursday, the test was modified so that only the propellant tanks on the booster stage were to be filled. But then a hydrogen leak was detected in what is called the tail service mast umbilical that attaches to the bottom of the rocket, and the rehearsal was scrubbed. The oxygen tank was not quite half full, and hydrogen fueling had just started.

Last week, NASA officials said they hoped to fix the hydrogen leak while the rocket was still at the launchpad. But on Monday, they said they had changed their minds. Next week, the rocket is to be rolled back to the Vehicle Assembly Building, where technicians can more easily get access to parts of the rocket. That will allow replacement of the balky upper-stage valve.

At the same time, an off-site vendor that provides nitrogen gas — used to purge hazardous gases — will upgrade its systems. During two of the rehearsal attempts, disruptions in the nitrogen supply delayed the countdowns.

“The mega moon rocket is doing very well,” Tom Whitmeyer, deputy associate administrator for common exploration systems development at NASA, said during a news conference on Monday. “I think we’re really getting smart with this rocket. But we’ve got a little bit more work in front of us.”

The Space Launch System, a key component of NASA’s Artemis program to send astronauts back to the moon, is years behind schedule and billions of dollars over budget. With the latest problems, getting the rocket ready in time for a launch during a two-week window in early June would be challenging, Mr. Whitmeyer said. There are additional two-week opportunities beginning in late June and late August.

“We are currently working on a couple of different schedule options that we’ll be reviewing with the management team over the course of the week,” said Charlie Blackwell-Thompson, the launch director.

One would be to perform the minimal amount of repairs needed — the upper-stage valve and the hydrogen leak — and return to the launchpad as quickly as possible for the wet dress rehearsal. A second option would involve some additional work needed to make the rocket ready for launching. Both options would require one more trip back to the Vehicle Assembly Building.

A third option would be to get the rocket entirely ready for launch, and then conduct both the rehearsal and launch without another trip back to the building.