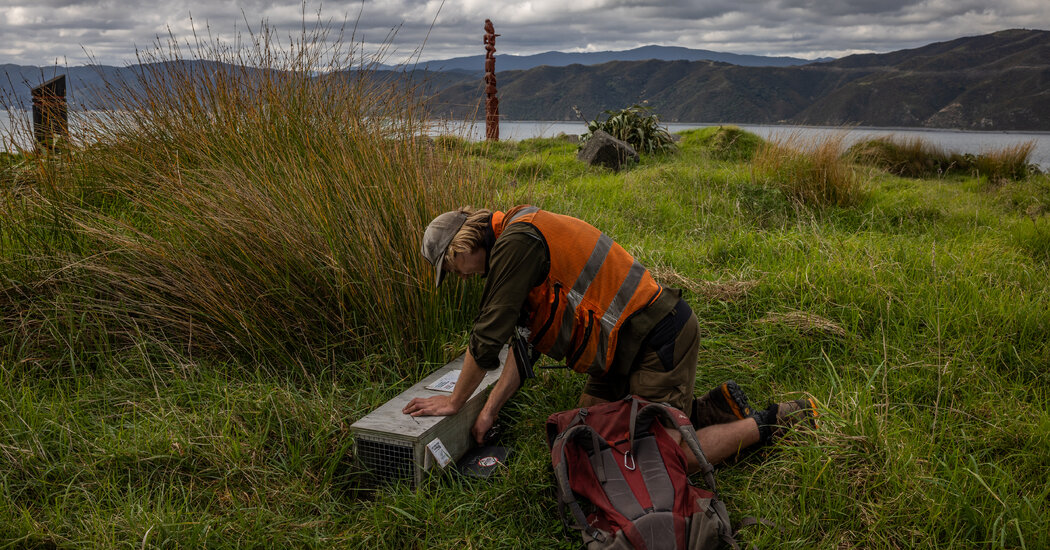 
WELLINGTON, New Zealand — The volunteer clambered down the cliffs, progressing along a series of knots on a thin rope as he made his perilous way about 100 feet down a steep rock face to the small box that he needed to refill with poison.

It is one of thousands of such boxes, many in equally inaccessible spots, that have been distributed in the past month across Miramar Peninsula, south of New Zealand’s capital, Wellington.

Conservation workers and volunteers, like the cliff-clinging Dan Henry, have been baiting traps with fresh rabbit meat, scattering poison daubed with aromatic lure and scouring footage from cameras across the headland, all in an effort to address the area’s stoat problem.

A problem that appears to consist of a single stoat.

That people are willing to go to such lengths in pursuit of one predatory mammal is a testament to the gravity of the biodiversity crisis in New Zealand. Its native birds, lizards and bats evolved in the absence of mammalian predators, which arrived only in recent centuries.

Many of its most iconic native creatures are flightless. As a result, they are defenseless against predators like stoats — weasel-like creatures with jagged teeth and remarkable agility — which were introduced to New Zealand in the 19th century to control rabbits. Approximately 4,000 of the country’s native species are classified as “at risk” or “threatened” — the highest proportion of threatened native species in the world.

Activists on Miramar Peninsula have committed themselves to ridding the peninsula — which until the 2010s was rife with unwanted mammals — of almost all predators. (Domesticated cats, which remain politically untouchable despite their capacity to kill, are an exception.) Their goal may seem unrealistically ambitious, but it has become normal in New Zealand, where the government committed in 2016 to eliminating most nonnative predators by 2050.

“Many of our species give our country its sense of identity,” said Kiri Allan, New Zealand’s conservation minister. “At risk is our very sense of nationhood.”

Six years in, the campaign has achieved significant successes. New Zealand’s Department of Conservation has placed a thousand square miles of land under sustained predator control, eradicated predators from 117 of its roughly 600 islands and created multiple fenced predator-free reserves around the country.

Now, though, the nation’s conservation community is tussling over whether it can achieve that goal — and at what cost.

In Miramar — which is connected to the rest of Wellington by a large, unfenced isthmus and is home to tens of thousands of people — the department has worked with local volunteers to eliminate possums, weasels and brown rats. Stoats are on their way out, and black rats are at their lowest numbers since measurements began.

Mr. Henry, who co-founded the Predator Free Miramar volunteer group, is not satisfied. “I don’t think the wins are coming fast enough,” he said.

Nicola Toki, the chief executive of the conservation advocacy group Forest & Bird, agreed. “At the current pace and scale, the risk is that we won’t get there.”

But some in the conservation community doubt whether getting there is even viable, in view of how resource-intensive predator elimination has proved to be.

In Miramar, for example, 5,878 traps and 6,607 poison stations have been laid across the peninsula’s three square miles. Each must be regularly checked, requiring dozens of paid staff members and local volunteers.

Another approach would be to focus on creating more places like Zealandia, also near Wellington, which is a fenced reserve of nearly one square mile where native wildlife can thrive. New Zealand has a network of such predator-free spots, some on offshore islands.

The sanctuaries are expensive to build and maintain, and can safeguard only relatively small areas. But while New Zealand’s predator-free campaign aspires to eliminate predators in the long term, fenced reserves offer immediate safety.

Conservation advocates want the government to pursue both. But with limited conservation spending, prioritizing one might prevent full adoption of the other.

Ms. Allan characterized the predator-free goal as “aspirational.” In a written statement, she said that the government has made substantial progress, but that going forward it would focus on “innovation and learning” with the aim of discovering “more effective and efficient ways of protecting our biodiversity at a much larger scale.”

Ms. Toki, by contrast, insists full elimination is achievable, but requires much more funding and focus by the government. Referring to the approximately $250 million that New Zealand spent hosting the America’s Cup sailing competition in 2021, she said, “Do America’s Cup for Predator Free.”

Local activists agree. “Predator Free 2050 is absolutely achievable, if that’s what we decide to do,” Mr. Henry said. “I guess I thought when we started that we’d start with old tools and a silver bullet would appear and we’d all breathe a sigh of relief.” But that hadn’t happened, he said. “It just takes boot leather, traps and poison, and putting that everywhere we can.”

As he leaned over a trap with a stick to demonstrate what happens when the mechanism is sprung, there was a sudden flutter and cheep by his shoulder. A pīwakawaka — whose tail feathers resemble an expanded accordion — settled on a nearby branch. The number of native birds on the peninsula has soared since the predator free campaign began.

Mr. Henry acknowledges that total elimination isn’t the only measure of victory. Nonetheless, he and other members of Predator Free Miramar are determined to achieve their goal in order to demonstrate that it’s possible at a national level.

“People see the success that we’ve achieved here,” Mr. Henry said. “They want to replicate it. We’re a real demonstration of what you can achieve if you work at it and the community swings behind.”

That includes tracking down that last stoat. Sue Hope, a local volunteer, is optimistic it has already been poisoned or snared. Still, she spends every Sunday morning tramping across hillsides to reset traps and refill poison stations, just to be safe.

“Stoats are horrible,” she said. “They kill things for no reason, not even to eat them.” Then she dives off the track and burrows under a thorn bush in search of the next trap to check.