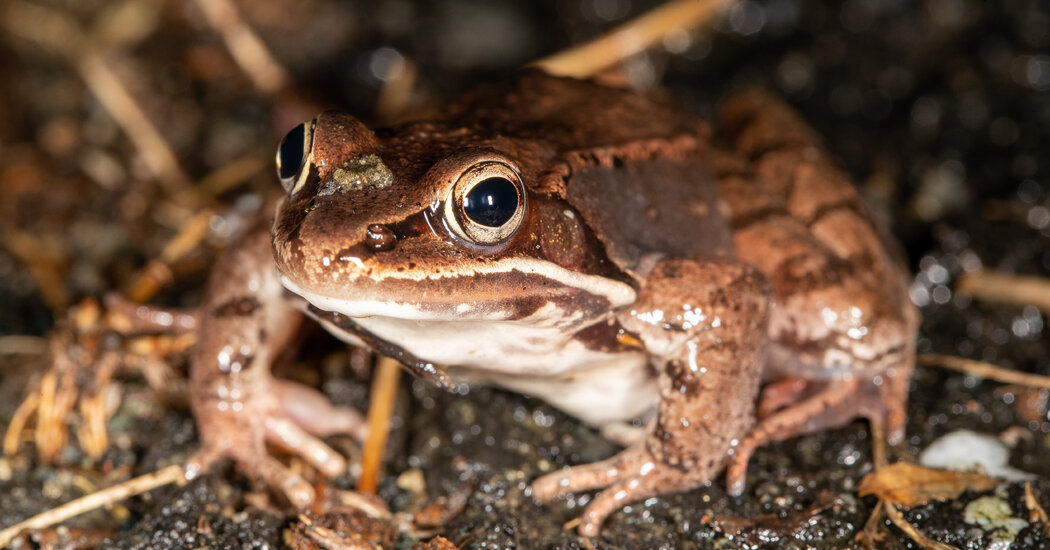 
In the winter, the woods of New Hampshire are littered with small, frozen frogs. Although a frozen wood frog’s heart does not beat, the frog is not dead. It is in an state of suspended animation: an amphibian ice cube.

As spring approaches, the frogs begin to thaw from the inside out. Their hearts beat. Their blood rushes. They hop out of the leaf litter and toward a vernal pool, usually the one where they first hatched, to find a mate.

The frogs, as big as stroopwafels, paddle around the surface of the water, inflate their vocal sacs and call out to any female frogs in earshot. Each frog scream begets tiny ripples in the water. “On a clear day, it looks like it’s raining in the pond,” said Ryan Calsbeek, an evolutionary biologist at Dartmouth.

“From a little distance, they sound like a flock of geese,” said Laurel B. Symes, the assistant director of the K. Lisa Yang Center for Conservation Bioacoustics at the Cornell Lab of Ornithology.

The slimy bachelors’ cumulative calls form a distinct chorus, which female frogs rely on to choose a pool where they will find mates. The choruses are so raucous it is impossible to distinguish one singing frog from another, let alone study which males’ calls are more attractive to females. This, to Dr. Calsbeek, was the unanswerable question: “What does a female frog find sexy?”

In a paper published in March in the journal Ecology Letters, Dr. Calsbeek, Dr. Symes and Francisco Javier Zamora-Camacho, a researcher at Dartmouth, tried to answer this question. With the help of an advanced acoustic camera, they teased out the songs of individual males and began to untangle choruses that appear to humans and other animals to be a lot of chaos and noise.

Lindsey Swierk, a behavioral ecologist at Binghamton University who was not involved with the research, said the scientists had offered “fantastic insight” into the calls of individual frogs within the chorus. “To a frog’s eye, there is definitely logic,” Dr. Swierk said. “It’s us humans that have trouble seeing the patterns.”

In the past, some wood frog researchers tried to eavesdrop on these choruses with GoPros, shotgun microphones and automated call recorders. But these devices picked up only the overall soundscape of a pond. All humans needed, it turned out, was a very fancy acoustic camera. The camera, a Ring48 AC Pro, looks a bit like a Ferris wheel, with its ring-shaped frame studded with small microphones. “It’s like having 48 different ears,” Dr. Calsbeek said.

Allison Sacerdote-Velat, the curator of herpetology at the Peggy Notebaert Nature Museum in Chicago who was not involved with the new paper, said: “I’m jealous of their field equipment.”

The researchers lugged the camera, its 45-pound battery and about 75 feet of Ethernet cable to vernal pools in the woods by the Dartmouth campus. To ensure all frogs in the pond would sing, Dr. Calsbeek dropped a tennis ball (labeled in Sharpie as a “frog frightener”) into the water to prompt the chorus to restart.

The resulting footage was a video of the pond with a heat map indicating individual frogs as they called out. “It goes blip, and you can see where the frog is,” Dr. Calsbeek said. But the videos were still tricky to analyze, capturing 25 to more than 150 frogs in a single video that were constantly swimming around the pond, Dr. Symes said. They found that individual frogs timed their calls to follow their neighbors.

The researchers later returned to the ponds to record the number of egg masses the size of softballs that had been laid in the pools to estimate which choruses females might have preferred.

The researchers also conducted tests in a lab using the individual calls they had extracted from the wild ponds. Dr. Zamora-Camacho led playback trials in which a female frog could pick between two choruses. The trials found that females preferred calls with lower pitches. These deeper calls usually indicate a bigger male.

But this preference did necessarily not hold up in the forest. Ponds with males whose voices formed a chorus with little variation in overall pitch, regardless if the pitch was low or high, wound up with more egg masses. This could indicate that the females preferred the uniformity in the sound of the chorus, Dr. Calsbeek said. Dr. Swierk cautioned that “the causes underlying these observed patterns are still very much up in the air.”

All the logic and desire that guides a female frog to a specific pond vanishes once she arrives, and a melee ensues as males race to cling to her in a tight embrace called amplexus. Males are so desperate to mate that multiple males will unsuccessfully try to mate with a female that is already amplexed, or even anything slimy and alive, such as a tiger salamander. “It’s like a grappling ball of frogs,” Dr. Sacerdote-Velat said.

Dr. Sacerdote-Velat and Dr. Swierk both expressed hope that the acoustic camera could be used to observe reproductive behavior in other species of frogs where females have more ability to discriminate between and choose their mates.

But female wood frogs may have more decision-making powers than previously thought. “Wood frogs are philopatric, which means that most return to breed in the pond where they were hatched,” Dr. Swierk said. Wood frogs’ allegiance to home is so strong that the amphibians will aggregate over a former pond that has been paved over, Dr. Sacerdote-Velat said.

The new paper’s implication that females may actively choose where to breed complicates this longstanding assumption, Dr. Swierk said.

Yet even with these choices, wood frogs never have to hop too far. “They’re little sound-producing blobs and they dry out fast, so they tend to stick around where they came from,” Dr. Symes said.