Pale Blue, Deep Blue: How Uranus and Neptune Get Their Colors 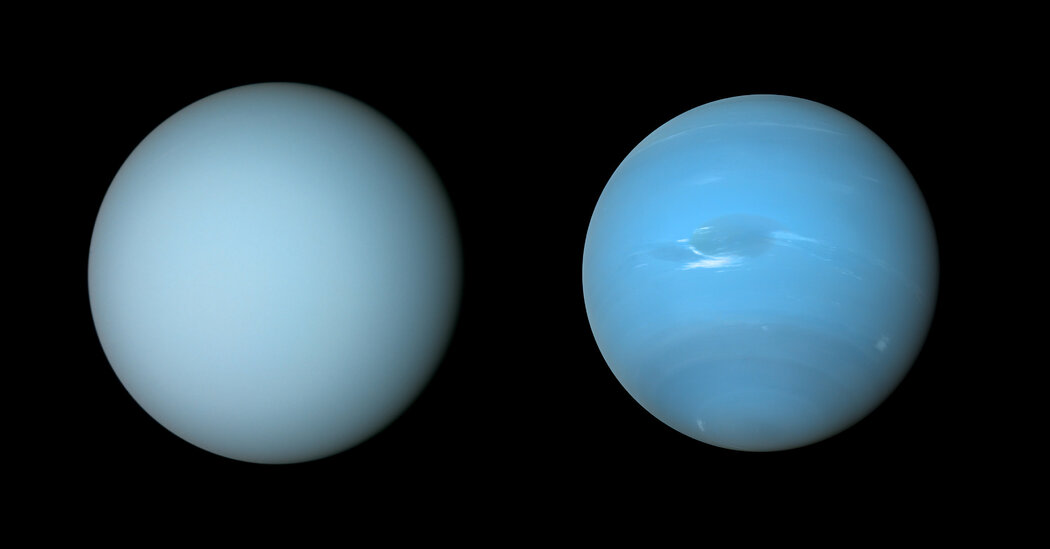 Why, scientists wondered, isn’t Uranus too?

It’s an intriguing question. Uranus and Neptune, the two outermost planets of our solar system, are both ice giants — cold worlds that are part gas, part ice, with similar chemical compositions.

They’re not far off in mass, either, Uranus being 15 times that of Earth, and Neptune 17 times. And they’re both about four times the size of Earth, Uranus being slightly larger.

Yet the two worlds look decidedly different. Uranus, as first revealed by NASA’s passing Voyager 2 spacecraft in 1986, is a featureless light-blue blob. When the same spacecraft encountered Neptune in 1989, it revealed a world with the most powerful winds in the solar system, which rip through a royal blue atmosphere, with giant storms and even a mysterious dark spot. Why the difference?

Patrick Irwin, a planetary physicist at Oxford University, and colleagues have now developed an answer. They pieced together a detailed understanding of each world’s atmosphere using the Gemini North telescope in Hawaii, the Hubble Space Telescope and other observations.

Both worlds are blue because they have methane in their atmospheres, which absorbs the color red from the sun’s light. But a key middle layer of methane haze on Uranus appeared to be twice as thick as the layer on Neptune. It is the presence of this additional haze that leads to the different visages.

“That haze is sort of white-ish in appearance,” Dr. Irwin said. “That’s why Uranus looks paler than Neptune does.”

The research was published Tuesday in the Journal of Geophysical Research: Planets.

Imke de Pater, a planetary scientist at the University of California, Berkeley, said the finding made sense. “The methane abundance on the two planets is very similar,” she said. “Something has to explain the difference in colors.”

Why Uranus has a thicker haze layer than Neptune may be a result of a giant impact early in its life that knocked the planet on its side, said Leigh Fletcher, a planetary scientist at the University of Leicester in England and a co-author on the paper.

“All of its internal energy and sources of heat could have been relinquished in that enormous collision,” he said. “So what you see today is a more stagnant world.”

Both worlds would lose haze as methane ice pulled it into the lower atmosphere, falling as methane snow. But on the more active Neptune, methane snow falls more often, leading to a thinner haze layer.

Erich Karkoschka, a planetary scientist at the University of Arizona, said he “wouldn’t make that assumption,” that Uranus’s collision with another object explained why it was less active than Neptune. He suggested that the worlds may just be physically different enough to account for the differences in their atmospheres.

The work may also explain the origin of Neptune’s vast and mysterious dark spots, Dr. Irwin said, which appear to be caused by a darkening of the haze particles, possibly caused by evaporating hydrogen sulfide ice.

A future Uranus orbiter and atmospheric probe is now a top priority for NASA to launch in the 2030s. That could tell scientists more about the haze layers, as will observations with the James Webb Space Telescope.

“There’s still an awful lot of uncertainty,” Dr. Irwin said. “We don’t really know what the particles are made of. The only way to really know what’s going on is to drop a probe into these deep atmospheres.”