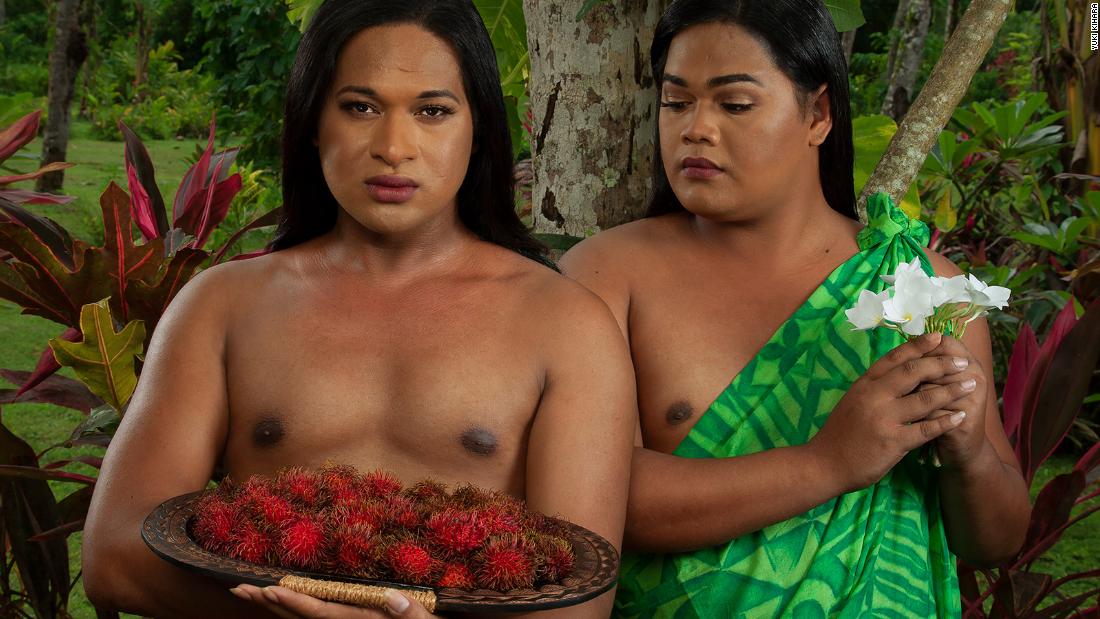 On an early morning in 2008, before the Metropolitan Museum of Art opened for the day, the artist Yuki Kihara sat down across from two paintings by the French artist Paul Gauguin and inspected them in the hushed, empty gallery.

The Japanese and Samoan artist, who was exhibiting at the New York museum at the time, was particularly interested in “Two Tahitian Women,” from 1899, which features two feminine figures in an Eden-like setting. One holds a flower and leans into her companion, who presents a tray of fruit to the viewer, but doesn’t quite look up to meet the eye. Fourteen years after first seeing it, Kihara has “upcycled” — or reinterpreted — the painting, along with many of Gauguin’s other artworks, in a photography series titled “Paradise Camp” for the Venice Biennale.

“It’s not like reenactment or restaging, because when I say ‘upcycling,’ it means that I’m actually improving it from the original,” Kihara said in a video call.

Kihara is the first Pacific Indigenous artist from Samoa’s Fa’afafine community — who are assigned male at birth but express a female identity — to represent New Zealand at the prestigious global art show. In “Paradise Camp,” curated by Natalie King, Kihara intertwines themes of LGBTQ+ rights, environmentalism, and decolonization. In her lush images, taken on Upolu Island in Samoa with a nearly 100-person cast and crew, she casts Fa’afafine in the starring roles, keeping the familiarity of Gauguin’s compositions but shedding his exploitative perspective.

In modern art, Gauguin’s colonial gaze of paradise has been formative. The painter, who died in 1903, spent a decade of his later life in French Polynesia exoticizing the young Indigenous women he encountered through a prolific number of canvases, and had predatory relationships with them as well — a complicated legacy that was addressed in the exhibition “Gauguin Portraits” at the National Gallery in London in 2019. The teenage girls he painted included a 13-year-old named Teha’amana a Tahura, who experts believe to be his second wife, though her identity has been debated.

How true are Gauguin’s works and how much is constructed? To Kihara, the scenes, supposedly set in Tahiti, felt all too familiar.

Through her extensive research of colonial photography, Kihara has found a clear link to the archipelago — specifically through the images of Thomas Andrew, a New Zealand photographer who lived in Samoa for the latter half of his life, from 1891 until 1939. Kihara discovered compositions identical to Gauguin’s work, as well as evidence that Gauguin in 1895 visited the Auckland Art Gallery, where some of Andrew’s images were housed.

“Although Gauguin has never actually set foot in Samoa, some of his major paintings were actually directly inspired by photographs of people and places (there),” she said.

Kihara also believes that Gauguin’s models may not be cisgender women, referencing the research of Māori scholar Dr. Ngahuia Te Awekotuku, who has written that the “androgynous” models he painted were likely Māhū — the Indigenous Polynesian community that, like Samoa’s Faʻafafine, are considered to be a third gender and express a female identity.

With these connections in mind, Kihara set out to improve upon Gauguin’s famous works from a Pacific perspective. In her take on the painting “Two Tahitian Women,” called “Two Fa’afafine (After Gauguin),” the two Faʻafafine models stand in front of the manicured gardens of a local resort wearing traditional textiles. Kihara chose to feature local wildflowers and a plate of rambutan as their props, creating an altogether new iconography.

According to Kihara, her portrait challenges the very concept of paradise. “The idea of paradise is actually heteronormative,” she said, referencing the Bible’s Garden of Eden, home to Adam and Eve. In famous literature and art, as well as commercial imagery of honeymooning newlyweds, “paradise has been perpetuated by many people, including Paul Gauguin,” she said. “He comes from a canon of (the) Western gaze that impose this idea.”

Calling a place paradise also glosses over the complexities of the seemingly idyllic regions where tourists travel to escape, she added, including the land’s history of colonial violence and the looming threat of climate disaster, a battle in which Samoa is on the front lines.

After the Biennale concludes, Kihara plans to exhibit the work for her own community in Samoa, New Zealand and Australia.

“I’m taking the integrity and the dignity back to where it belongs to us, in the Pacific,” she said.

Yuki Kihara’s “Paradise Camp” will be on view at the Venice Biennale’s New Zealand Pavilion from April 23 to November 27.