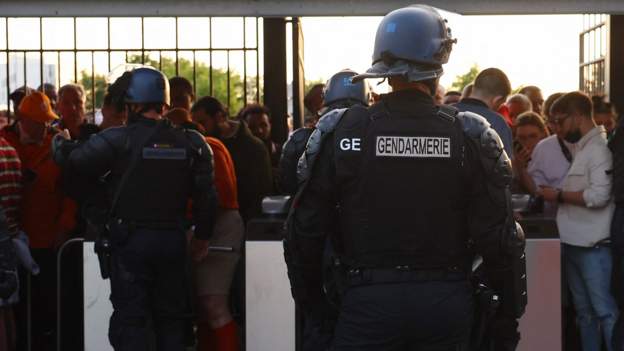 
Real Madrid have asked for answers into the “series of unfortunate events” at the Champions League final against Liverpool in Paris on 28 May.

They also want to know why the Stade de France was chosen for the game and who is “responsible for leaving the fans abandoned and defenceless”.

“Football has transmitted an image to the world which is far away from the values and goals which it should pursue,” said a Real Madrid statement.

The Spanish side won the final 1-0.

However, the match was delayed by more than half an hour and Liverpool fans have described heavy-handed policing, organisational chaos and overcrowding at the showpiece game, which was moved to the Stade de France from St Petersburg following Russia’s invasion of Ukraine.

In their statement, Real Madrid cited “unfortunate events” which took place “in the surroundings of and at access points to the Stade de France, and even inside the stadium itself” and that their fans “were victim to said events”.

They added: “We would like to know the reasons which led to this venue being chosen to host the final and the criteria used, taking into account the experiences of the day.

“Furthermore, we call for answers and explanations in order to determine those responsible for leaving the fans abandoned and defenceless. Fans who in general terms showed exemplary conduct at all times.”

European football’s governing body, Uefa, has commissioned an independent report into what happened at the final.

French authorities have blamed ticket fraud and accused Liverpool football club of failing to control their fans, although it has also emerged that supporters were targeted by local gangs.

“We believe something which should have been a wonderful festival of football for all fans who attended the game, quickly turned into a series of unfortunate events which have caused a sense of outrage around the world,” said Real Madrid.

“As was evident in the revealing images published by the media, several fans were attacked, harassed, assaulted and robbed in violent fashion.

“These occurrences continued as they moved in their cars or busses, causing concern for their physical wellbeing. Certain fans even had to spend the night in hospital as a result of injuries.”

The club added: “Our fans and supporters deserve a response and those responsible to be held accountable in order for events like these to be eradicated from football and sport in general.”