Some Elephants Are Getting Too Much Plastic in Their Diets 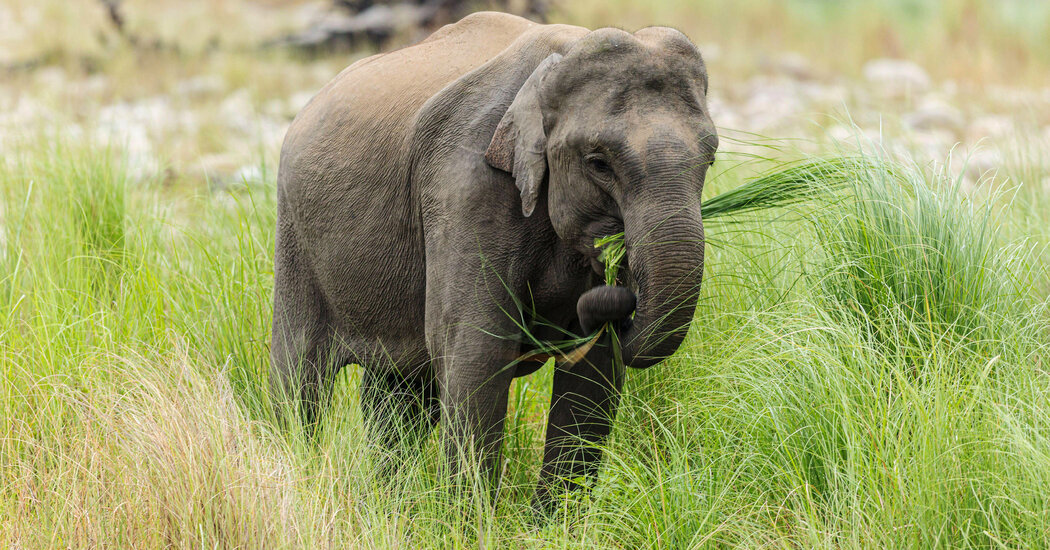 
Some Asian elephants are a little shy about their eating habits. They sneak into dumps near human settlements at the edges of their forest habitats and quickly gobble up garbage — plastic utensils, packaging and all. But their guilty pleasure for fast food is traveling with them — elephants are transporting plastic and other human garbage deep into forests in parts of India.

“When they defecate, the plastic comes out of the dung and gets deposited in the forest,” said Gitanjali Katlam, an ecological researcher in India.

While a lot of research has been conducted on the spread of plastics from human pollution into the world’s oceans and seas, considerably less is known about how such waste moves with wildlife on land. But elephants are important seed dispersers, and research published this month in the Journal for Nature Conservation shows that the same process that keeps ecosystems functioning might carry human-made pollutants into national parks and other wild areas. This plastic could have negative effects on the health of elephants and other species that have consumed the material once it has passed through the large mammals’ digestive systems.

Dr. Katlam first noticed elephants feeding on garbage on trail cameras during her Ph.D. work at Jawaharlal Nehru University. She was studying which animals visited garbage dumps at the edge of villages in northern India. At the time, she and her colleagues also noticed plastic in the elephants’ dung. With the Nature Science Initiative, a nonprofit focused on ecological research in northern India, Dr. Katlam and her colleagues collected elephant dung in Uttarakhand state.

The researchers found plastic in all of the dung near village dumps and in the forest near the town of Kotdwar. They walked only a mile or two into the forest in their search for dung, but the elephants probably carried the plastic much farther, Dr. Katlam said. Asian elephants take about 50 hours to pass food and can walk six miles to 12 miles in a day. In the case of Kotdwar, this is concerning because the town is only a few miles from a national park.

“This adds evidence to the fact that plastic pollution is ubiquitous,” said Agustina Malizia, an independent researcher with the National Scientific and Technical Research Council of Argentina who was not involved in this research but studied the effects of plastic on land ecosystems. She says the study is “extremely necessary,” as it might be one of the first reports of a very large land animal ingesting plastic.

Plastic comprised 85 percent of the waste found in the elephant dung from Kotdwar. The bulk of this came from food containers and cutlery, followed by plastic bags and packaging. But the researchers also found glass, rubber, fabric and other waste. Dr. Katlam said the elephants were likely to have been seeking out containers and plastic bags because they still had leftover food inside. The utensils probably were eaten in the process.

While trash passes through their digestive systems, the elephants may be ingesting chemicals like polystyrene, polyethylene, bisphenol A and phthalates. It is uncertain what damage these substances can cause, but Dr. Katlam worries that they may contribute to declines in elephant population numbers and survival rates.

“It is known from other animals that their stomachs may get filled with plastics, causing mechanical damage,” said Carolina Monmany Garzia, who works with Dr. Malizia in Argentina and was not involved in Dr. Katlam’s study.

Other animals may consume the plastic again once it is transported into the forest through the elephants’ dung. “It has a cascading effect,” Dr. Katlam said.

Dr. Katlam said that governments in India should take steps to manage their solid waste to avoid these kinds of issues. But individuals can help, too, by separating their food waste from the containers so that plastic does not end up getting eaten so much by accident.

“This is a very simple step, but a very important step,” she said.

“We need to realize and understand how the overuse of plastics is affecting the environment and the organisms that inhabit them,” Dr. Mealizia said.