The world’s skinniest skyscraper is ready for its first residents 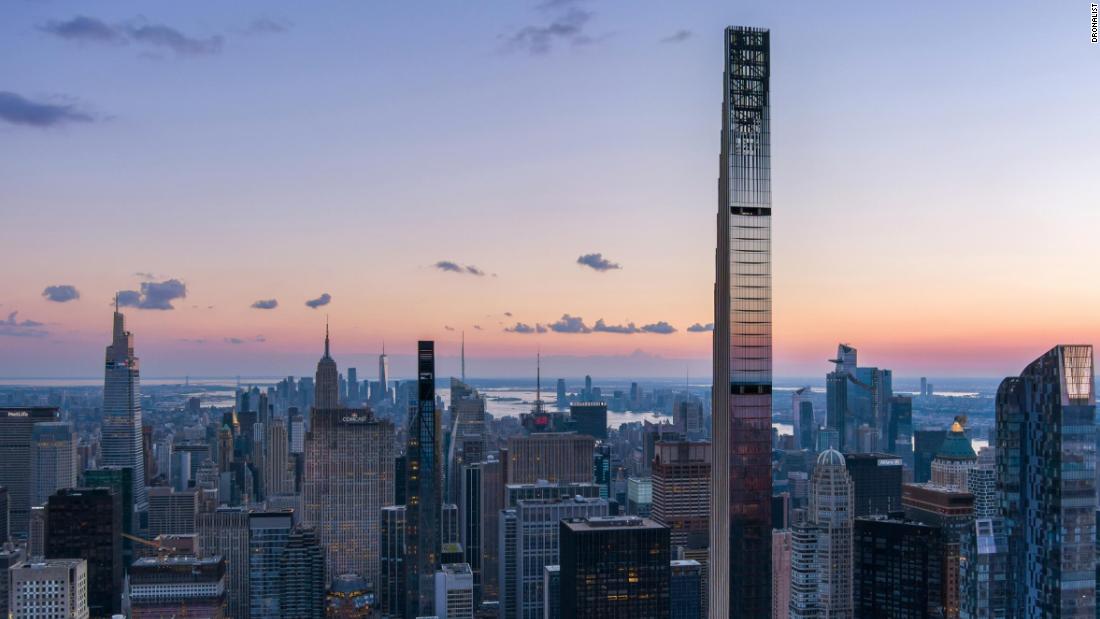 The world’s skinniest skyscraper has been completed, adding a new landmark to Manhattan’s famous skyline.

Steinway Tower, or 111 West 57th Street, has a height-to-width ratio of 24:1, making it “the most slender skyscraper in the world,” according to the developers.

At 1,428 feet, it is also one of the tallest buildings in the Western hemisphere, falling short of two others in New York City: One World Trade Center at 1,776 feet and Central Park Tower at 1,550 feet.

The tower was designed by New York architecture firm SHoP Architects and built by JDS Development, Property Markets Group and Spruce Capital Partners, which began construction in 2013. Gregg Pasquarelli, principal at SHoP Architects, called the building “a project of extraordinary proportions and epic grandeur” in an email to CNN.

Steinway Tower is only eclipsed by One World Trade Center and Central Park Tower in the New York City skyline. Credit: Dronalist

Super-slender skyscrapers, also known as pencil towers, became standout features of the Hong Kong skyline in the 1970s. Since then, major cities such as New York have followed suit.

Steinway Tower skyscraper is a powerful statement, tapering elegantly but dramatically from its tip. A triplex penthouse overlooking Central Park sits at the top.

The architects said their main goal was to create a new and bold interpretation of the New York skyline, while also celebrating the location’s historic roots.

A short history of the world’s tallest buildings

“Any preconceived notions that our team had about skyscrapers of New York City developments were replaced with an opportunity to do something that had never been done before,” Pasquarelli said.

The super-tall tower is an addition to Steinway Hall, a historic 1925 building known as the former home of the piano maker Steinway and Sons and a concert hall. This erstwhile cultural hub has been converted into luxury homes.

The architecture firm said it drew inspiration from “the golden age of the Manhattan skyscraper” and New York’s Art Deco history.

The tower’s façade includes blocks of terracotta, a material that appears to change color and texture when seen in different lights and from different angles.

Steinway Tower is now opening its doors to new residents, but while the building’s silhoutte is skinny, the prices certainly aren’t, ranging from $7.75 million for a two-bedroom apartment to $66 million for the penthouse.

This story was updated to reflect that prices start at $7.75 million for a 2-bedroom apartment, not a studio as previously stated.