‘This is Not America’s Flag:’ Artworks challenge what it means to be from the United States 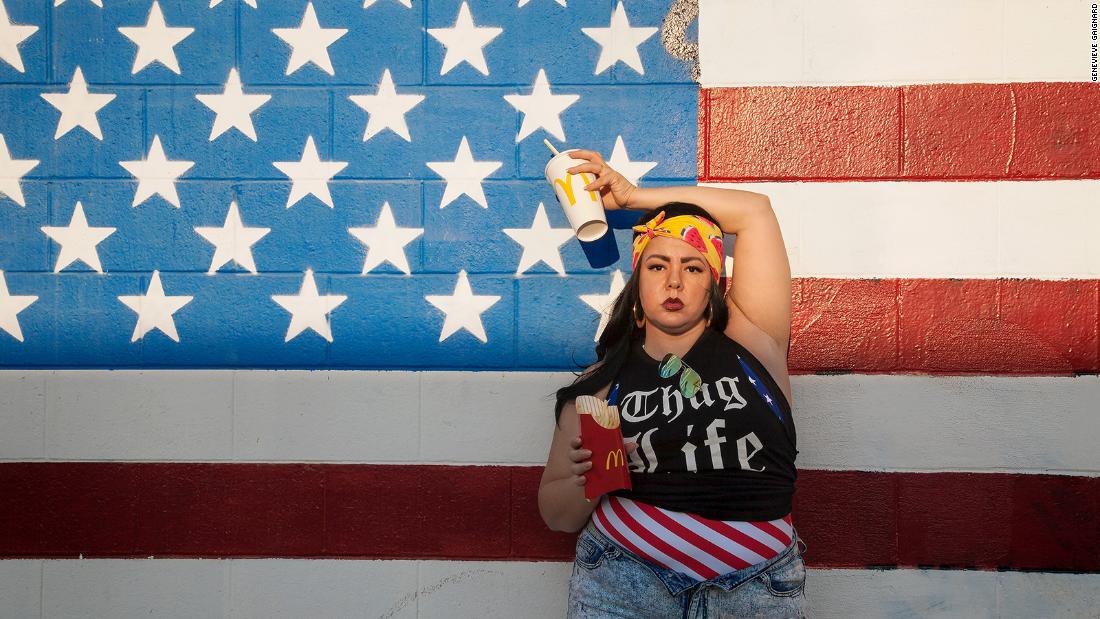 From the time the Continental Congress gave the stars and stripes its stamp of approval in 1777 amid the American Revolution, the flag of the United States of America has been an emblematic symbol of patriotism; an image of national pride displayed in front of homes, waved at parades and raised with solemnity in ceremonies. But, when flown upside down, burned, or manipulated in color and design, the flag can also send a far more subversive message.

A new exhibition at the Broad Museum in Los Angeles, titled “This is Not America’s Flag,” seeks to explore this dichotomy by displaying a series of works centered on the flag, questioning what it means to be American today.

A response to George Floyd’s killing

Conceived during the height of the Covid-19 pandemic, staff began work on the exhibition remotely in 2020 as protests erupted following the murder of George Floyd and the deaths of other Black Americans at the hands of police. With demonstrations happening just blocks from the museum, Broad curator and exhibition manager Sarah Loyer said she was motivated “to be more responsive to that moment and what was happening in our city and our nation and around the world.”

Loyer said the team initially focused on two pieces in the collection — Jasper Johns’ “Flag” from 1967 and the newly acquired 1990 “African-American Flag” by David Hammons.

Johns painted “Flag” at the height of Vietnam war protests, embedding newspaper clippings about the war within a painting of the flag. Months later, Congress passed the Flag Protection Act of 1968.

Two decades later, the Supreme Court took up a case of flag desecration, after a man was arrested for burning a US flag. The court ruled it was an act of “symbolic speech,” protected by the First Amendment.

Soon after, in 1990, Hammons created “African American Flag,” re-imagining the emblem by replacing the traditional colors with the red, black and green of the Pan-African flag. Loyer said Hammons’ version challenges viewers to question who the flag represents. “It’s brilliant in its simplicity,” she said, adding, “it becomes this really iconic artwork because it still waves patriotically.”

After months of discussion, the museum settled on a group of 22 artists and their wide-ranging interpretations of the flag. The exhibition features historical works such as Dorothea Lange’s photograph of a group of children posing with the flag in a Japanese internment camp in California during World War II and a work by 95-year-old sculptor Betye Saar which mounts the image of a Black World War I soldier on a tombstone with a US flag. More contemporary additions include “Extra Value (After Venus)” — a self-portrait by Genevieve Gaignard, who photographed herself in front of the flag in a “Thug Life” T-shirt and with a McDonald’s fries box in hand.

A Logo for America

The title of the show was inspired by Chilean artist Alfredo Jaar’s animated billboard, “A Logo for America,” which was first displayed in Times Square in 1987. The artwork flashed up images of the United States followed by a map outline of North, South and Central America in a commentary about the use of the word America to describe the United States.

Since the original work was first shown, it has come to take on different meanings. According to Jaar, viewers have seen the piece as an anti-Trump message and a call for more pro-immigration policies. “You create a work. It is shown at a certain moment in history, within a certain context. Time changes or context changes and people start … projecting other ideas. And it’s perfectly fine,” he said.

Some of the most powerful works on display are also the most personal.

Twenty years ago, mixed-media artist Hank Willis Thomas’ cousin Songha was shot and killed during a robbery outside a Philadelphia nightclub. Thomas turned his personal tragedy into a series of pieces evoking the US flag, but with thousands of stars symbolizing the victims of gun violence.

As the nation reels from another tragic shooting, this time in Buffalo, New York, the 2018 piece feels painfully relevant today. Cascading onto the museum floor is “15,580,” an installation that Thomas said represents lives lost.

“They are falling stars and I wanted to commemorate their lives,” he said. “We have not come to a healthy way of really memorializing them.”

As for why he felt compelled to work with the image of the US flag, Thomas explained: “It means so much to so many different people, it’s important to engage with it and to review it, to ponder what it means to our society, past, present and future.”

Elsewhere in the exhibition, Wendy Red Star’s installation “The Indian Congress” references a landmark meeting of 35 Native American nations in Omaha, Nebraska in 1898. The event coincided with the Trans-Mississippi and International Exposition, a fair showcasing the country’s agriculture and industry to the world, and as part of the program of events, visitors were offered the chance to see the Congress delegates as if they were some sort of attraction — exploiting the Native American people with tours of their encampments and staged reenactments.

Red Star, who is from Montana and of Apsáalooke descent, gathered historical portrait photographs from the event to display on two long tables, reconvening the Congress members in a different, more respectful, light. But as a reminder of the colonial power play at the time, the display tables are festooned with US flags and patriotic bunting. Red Star said the hands-on experience of cutting each photograph and learning the names and histories of each person made it personal for her: “It’s so important that Native people and Native voices are humanized.”

“What is important about exhibits like this is that it’s presenting history and it’s not silencing certain narratives, and … I think that could make you even more proud to be an American. It’s vitally important we not forget our history and including our brutal history. It’s only going to bring us healing,” Red Star said.

While the artworks on display all take a critical look at the flag, patriotism and what it means to be American, Loyer does not believe the artists are being disrespectful.

“When any artist engages the flag, they rely on an assumed knowledge of what the flag may stand for. So often that is liberty and justice and freedom. I see these works believing wholeheartedly in those concepts … and I also see the works as ways to challenge us, to think more deeply about those subjects, to think about history.”