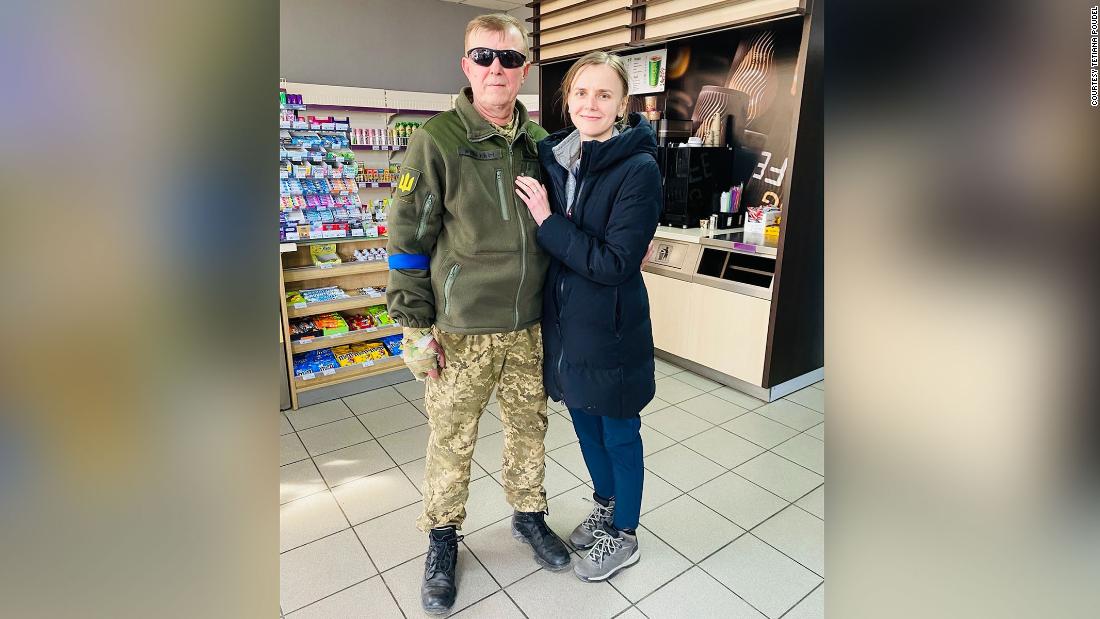 So Poudel, a 31-year-old Ukrainian American citizen — who’s on leave from her California day job as an attorney for the music-streaming service Spotify — packed up her life in Silicon Valley, moved to Poland and raised $13,000 for around 100 pairs of boots for her dad and members of his unit.

“I like to tell people I’m a lawyer by day and a boot smuggler by night,” she said earlier this month in an interview with CNN. A photo she shared with CNN shows her father and another soldier beaming next to new boots stacked on top of cardboard boxes.

In some cases, Poudel and Western officials told CNN, efforts by private citizens to funnel gear and supplies to Ukrainian soldiers have been faster and more direct — albeit on a much smaller scale — than the government-led initiatives. The boots are just one need among many — including firearms, ammunition and body armor — that volunteers and private citizens from around the world are trying to fulfill for the Ukrainian army, which has ballooned in size since Russia invaded two months ago.

The Biden administration is preparing to announce that it is sending another $800 million worth of military assistance to Ukraine, CNN reported Tuesday. If approved, the latest package would mean the US has committed about $3.4 billion in assistance to Ukraine since Russia’s invasion began on February 24.

But for Poudel and others on the ground, the aid being provided by Western countries is still “too slow and it’s not enough,” she said.

Poudel said she has been able to crowdsource enough money — through her contacts on LinkedIn, WhatsApp and volunteer organizations like UkraineNow — to buy the boots and obtain about a dozen tactical vests for her father and members of his unit. She delivered T-shirts to them last week, and the soldiers repaid her with pizza.

“These guys are just so grateful,” she said.

Poudel’s godmother had to pick up the boots in Poland and drive them over the border in multiple trips, since Ukrainian men aged 18 to 60 aren’t allowed to leave the country.

At the time, Poudel stayed in Poland with her mother and sister, who had fled Ukraine in the early days of the war. But underscoring how decisive Russia’s defeat has been in northern Ukraine, Poudel and her family felt secure enough in recent weeks to move back to their hometown of Lutsk in northwestern Ukraine, as Russia shifted its focus to the east of the country.

In a statement to CNN, Serhiy Sobko, a deputy commander and chief of staff for Ukraine’s Territorial Defense Forces, said the troops are thankful for all of the help from volunteers.

“Within a few weeks, the TDF expanded to over 100,000 people ready to protect their country from the enemy,” Sobko said, which led to a shortage in equipment.

“The Ukrainian government, our international partners, (and) prominent Ukrainian charitable foundations immediately involved their efforts to provide TDF with all needed equipment,” Sobko said. “And TDF command makes sure that those brigades and battalions that are on the front line get the protection first. Therefore we are grateful to those volunteers from Ukraine and abroad who contribute to equipping our soldiers.”

The official did not detail how much of that gear has been delivered so far. But the Ukrainian soldiers need much more of all of it, they said, particularly thermal imaging cameras, night vision devices and quadcopters. They also need extremely basic gear, like seat belts, backpacks, flashlights and gloves, according to a list compiled by the soldiers and obtained by CNN.

When it comes to shipping in heavier protective gear like body armor, Poudel and other volunteers, including two US Marine veterans she met in Poland, have run into considerable hurdles: Level III and IV body armor is regulated by the US and requires special authorization by the State Department, contracts frequently fall through and any equipment that does get in is often backed up at airports.

Level III armor provides protection against rifle rounds and level IV provides the most ballistic protection, according to the National Institute of Justice.

“One of the issues is, obviously, we’re just getting through Covid. So you have all kinds of supply conditions that are difficult just on day one,” Trey Sharpe, one of the Marine veterans helping Poudel, told CNN. “And then two, anytime you’re trying to procure items that are in intense demand, it becomes hard.”

Bureaucracy is another challenge, he said.

“So if I want to ship a level IV (body armor) plate out of the United States, for example, I have to deal with American bureaucracy, Polish bureaucracy, Ukrainian bureaucracy, and then I have to get the money too, and I’m trying to do all of this from a cell phone, often in the middle of nowhere,” he said, referring to his travels throughout western Ukraine. “It’s, you know, it’s not like shopping on Amazon. And I don’t need just one (plate), I need thousands.”

“Sometimes I do get very depressed and sad about how much I’m not able to do,” she said. “We have pretty much nothing and it’s not like it’s over just because Russia is refocusing on eastern Ukraine. They are still here” in the country.

It is worth the effort, though, despite the difficulties, she said.

“Doing whatever I can on the ground here feels more meaningful than just sitting in the (United) States, even if it’s just like, buying them vests and raincoats,” she told CNN. “It’s like, OK, I’m doing something real. I really see where it gets delivered.”

Poudel added that while humanitarian aid is clearly needed, it is little more than a short-term solution to the widespread suffering Russia is inflicting upon civilians — if that aid even gets delivered at all.

“I support humanitarian aid,” Poudel said. “But I think that is just a Band-Aid. The most important thing right now is to support the Ukrainian armed forces, because in most cases that humanitarian aid isn’t even getting into the places that need it.”

Poudel’s father, Volodymyr Danyliuk, told CNN in a video interview that what is “most needed are helmets, transport vehicles and air defense systems. Because most of the time they are attacking from the air, and we can’t protect ourselves against it.”

Ukrainian officials have told the US that to keep Russia from controlling the skies over the country, Ukrainian forces need 500 anti-aircraft Stinger missiles per day. The Pentagon plans to speed up production of the weapons; the shipments have so far not kept up with the Ukrainians’ demand.

Medicines are similarly hard to come by. Poudel explained that because so many pharmacies have been destroyed, Ukrainian women, including herself, have begun driving into Poland to pick up medications and deliver them back over the border.

Poudel said she is grateful to Spotify for allowing her to take leave to be with her family, because she can’t imagine leaving her mom and sister to fend for themselves in Ukraine while her father is serving in the Territorial Defense Forces. Spotify declined to comment.

“I’m basically the sole provider for my family right now,” she said.

But when it comes to working to supply the Ukrainian forces, Poudel is far from alone.

“There are thousands and thousands of guys just like me, hundreds of groups just like the group that I started, doing the same thing,” said another American veteran running a private effort to deliver medical equipment to Ukrainian soldiers and civilians, who requested anonymity to discuss his efforts freely. He said he’d raised enough money for 30 military-grade trauma kits, which he was able to deliver to Ukrainian soldiers earlier this month, according to photos he provided to CNN.

Police departments across the US have joined the effort, too. The governors of Iowa and Nebraska, for example, announced earlier this month that their states would send police protective gear to Ukraine, including military-grade helmets and vests.

Poudel, for her part, says she began working with US Marine veterans to try to leverage their connections to companies that can source essential equipment like body armor, helmets and tourniquets.

In many cases, the volunteers working to get equipment into Ukraine are making sure US government agencies are aware of their efforts, particularly to ensure that they don’t run afoul of any export control laws. Sharpe, one of the Marine veterans, told CNN he had been given preliminary guidance by officials at the Justice and State departments on remaining in compliance as he worked to import supplies.

The State and Justice departments declined to comment, but a spokesperson for the Commerce Department told CNN that “numerous communities around the United States have sought to assist the Ukrainian government and its resistance to Russia’s invasion by donating firearms, ammunition, helmets, bulletproof vests and related equipment.”

The spokesperson added that the Commerce Department “has been processing requests rapidly for the export of firearms and ammunition to Ukraine under its existing processes and authorities.”

There are a number of things the department has advised Americans to consider if they do try to send equipment, the spokesperson said, including how they intend to transport it to Ukraine and whether or not* the sender has been authorized by the Ukrainian government to import the supplies.

There are also tighter restrictions on exports to the Donetsk and Luhansk regions, where the war has shifted in recent weeks, the spokesperson said.

“We owe them every bit of support that we can give, because they’re fighting our fight too,” Sharpe said of the Ukrainians. “And all we need to do is get them more materials and expertise and supply. I think it’s our duty, every single person in the United States, in the world. They deserve our help.”

Danyliuk, Poudel’s father, said the next major challenge for the Ukrainian forces will be to liberate the south from Russia, particularly the Kherson region. There is also a “constant threat of danger” from Belarus, he said, and he does not believe the threat posed by Russian President Vladimir Putin will ever really end.

But he still believes Ukraine will succeed, not least because of the sheer determination of its people. In peacetime, Danyliuk is a writer and historian, and recently had a book published in coordination with the Polish consulate in Lutsk. It’s about the late President John F. Kennedy’s connections to Poland and Ukraine.

Danyliuk misses journalism. “But there are times when the journalist needs to carry not the camera, but the gun,” he told CNN, in a loose translation of a Ukrainian saying.

“We weren’t surprised by how well Ukrainians have fought,” he said. “Everybody is a volunteer. They stepped onto the front line. That is why I’m convinced we will win.”