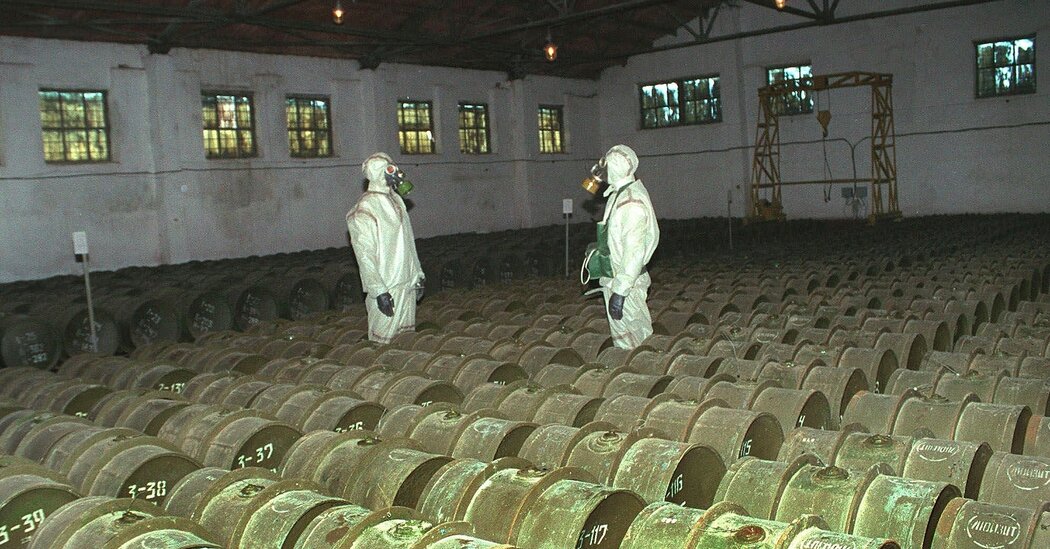 
In September 2017, as President Vladimir V. Putin presided over the televised destruction of what he called the last of Russia’s chemical arms, he hailed their elimination as “a huge step towards making the modern world more balanced and safe.”

Now, years later, President Biden and Western leaders are warning that Russia may carry out chemical strikes in Ukraine. No hard evidence has emerged of chemical arms deployed in or near the theater of combat, in contrast to the Russian leader’s clearer nuclear warnings. Analysts nonetheless see the threat of chemical warfare as real because Mr. Putin has long shown a willingness to ignore the international ban on chemical weapons. This helps him create an atmosphere of toxic intimidation, they say, that may give Russia a battlefield edge without ever having to fire a shot.

“He’s already scaring people,” said Hanna Notte, an expert on Russia’s use of chemical arms at the Middlebury Institute of International Studies in Monterey, Calif. The wide apprehension, experts noted, is prompting the West to provide Kyiv with gear and training meant to thwart any chemical strikes.

“It’s a war of narratives,” Nikolai Sokov, a former Soviet diplomat who negotiated arms-control treaties, said of Ukraine and Russia, which have each accused the other of preparing for chemical warfare. He added that they “blame each other, so there’s definitely an attempt at scoring points in an information war.”

Concerns about chemical warfare were raised on April 11 when the Azov Regiment, a Ukrainian military unit in the besieged city of Mariupol, reported that a Russian drone had dropped a “poisonous substance” into the sprawling steel mill where the defenders had taken refuge. The victims were said to have suffered dizziness, respiratory pain and eye inflammation. The claims made in a video released by the regiment remain unverified.

“I saw a fog,” a supine man with tightly shut eyes said in the video. “It was very difficult to breathe.” He said his legs grew weak. “Felt very bad,” the man said between labored breaths.

The Organization for the Prohibition of Chemical Weapons, based in The Hague, said it was “monitoring closely the situation in Ukraine” and was investigating the reported attack.

Chemical weapons are relatively cheap and easy to make compared with biological and nuclear arms. But modest amounts can result in mass casualties. Military textbooks show victims covered in burns and giant blisters. The eyes, nose and lungs — organs easily in contact with the air or aerosolized toxins — are especially vulnerable.

“The weapons terrify people and generate panic,” said Leiv K. Sydnes, a chemist at the University of Bergen in Norway who has advised the treaty organization. “The military purpose is to undermine the trust of soldiers and civilians in their shelters, fortifications and hiding places.”

After the Cold War, a global treaty, the Chemical Weapons Convention, outlawed the development, production, stockpiling and use of chemical arms. The Organization for the Prohibition of Chemical Weapons polices the treaty from The Hague and relies on a global network of laboratories to study field samples for signs of outlawed usage. The organization has 193 member states, all signatories of the treaty.

When Russia signed the convention in 1993, it declared that it held more than 40,000 tons of chemical weapons — the world’s largest such arsenal. Its munitions included mustard gas, which burns the eyes and lungs, as well as a variety of nerve agents.

Unlike Russia’s nuclear arms and the military doctrine for their use, Moscow after the Cold War never ran chemical war games and field exercises. But some experts hold that smaller-scale uses of chemical agents and Russia’s involvement in the Syria conflict show that Mr. Putin has a clear attachment to chemical warfare.

In 2002, Russian security agents pumped a noxious gas into a Moscow theater to end a hostage crisis, killing more than 100 people. Officials defended the action and said it represented no violation of the chemical treaty — a claim that American experts came to dispute. Mr. Putin was Russia’s president at the time.

Experts say the Kremlin’s darkest hour with chemical arms came in Syria, where it shielded the regime of President Bashar al-Assad from civil unrest and became complicit in years of toxic strikes against rebels and civilian populations.

The Obama administration identified the main poison as sarin, a liquid nerve agent that vaporizes into a deadly mist that human skin can quickly absorb. Reported symptoms included unconsciousness, foaming from the nose and mouth, rapid heartbeat and difficulty breathing. Nerve agents throw the body’s nerves and muscles into overdrive, producing spasms, paralysis and, if sufficiently concentrated, death. The iris, a muscle, contracts so much that the pupils of victims often constrict into tiny dots.

Many experts assumed that such a clear violation of international law would prompt Western military intervention, especially because President Barack Obama had declared the use of chemical arms a “red line.”

But Mr. Putin, in a New York Times opinion piece, urged restraint. “We must stop using the language of force and return to the path of civilized diplomatic and political settlement,” he said. The crisis ended when Moscow proposed that Syria put its chemical arsenal under international supervision and eventually destroy the lethal arms.

Dr. Notte of Middlebury, an expert on the Syrian conflict, said the job of identifying the kind of poison and its perpetrator can take months, sometimes a year. “It’s very hard to hold a state responsible,” she said. The same may eventually be true, Dr. Notte added, if Russia engages in chemical strikes in Ukraine.

Moscow’s next move? Russia appears to be preparing to annex two regions in eastern Ukraine and possibly a third in the country’s south, a senior American diplomat said. The official said that the Kremlin would most likely stage “sham” elections to formally seize control.

Investigations can be daunting if wind or rain disperse the poisons. Some chemical agents are volatile and evaporate easily. Often, a difficulty is ensuring the integrity of what experts call the chain of custody — the careful tracking of how a sample moves from collection, to transport, to lab analysis as a way to deter tampering. The chaos of war can make that job especially hard.

Detecting the Kremlin’s use of chemical agents, experts say, has been relatively easy off the battlefield. In March 2018, Sergei V. Skripal, a former Russian military officer who had worked for Britain’s intelligence services as a double agent, was found in Salisbury, a quiet English cathedral city, slumped on a park bench, hallucinating and foaming at the mouth. Collapsed against him was his daughter.

Then, in August 2020, Alexei A. Navalny, a relentless critic of Mr. Putin and the president’s main political opponent, was flying to Moscow when he became violently ill. Confused and perspiring heavily, he vomited, collapsed and lost consciousness.

Both men were found to have been poisoned by a military-grade nerve agent of the Novichok family, a potent class of chemical arms developed in Soviet times.

The poisonings spoke to what experts had long suspected — that Mr. Putin had retained at least some parts of his vast arsenal. Worse, analysts saw the Skripal incident as evidence that the Russian leader was ready to use the weapons overseas, as investigators found that two Russian agents had smeared Novichok on the handle of the front door of Mr. Skripal’s house.

Although Russian authorities denied involvement in the two attacks, or the possession of chemical arms, both the Trump and Biden administrations imposed sanctions on a number of Russian spies, officials and research institutes.

Last year, Joseph Manso, the U.S. representative to the Organization for the Prohibition of Chemical Weapons, called the Novichok poisonings “a clear violation” of the Chemical Weapons Convention and “a threat to international security.”

In Ukraine, Western officials warn, Moscow is now using the disinformation playbook it honed in Syria to claim that Kyiv is preparing for chemical strikes as a pretext for its own attacks. “Radical Ukrainian groups,” its representative to the treaty group said on March 10, “have prepared several potential scenarios of the use of toxic chemicals.” Weeks later, the Azov Regiment in Mariupol accused Russia of the strike.

Also in April, Moscow appointed General Dvornikov, the former Syrian commander, as the top military leader for the Ukraine war.

Today the big uncertainty is how the West would respond if a major chemical attack in Ukraine was unambiguously tied to Russia. Unlike the case with nuclear arms, where atomic rivals hold out the possibility of responding in kind, the West has renounced use of the deadly poisons.

Analysts have suggested the application of more diplomatic pressure, more sanctions, and more cutoffs of Russian oil and gas imports to Europe. They’ve also argued that the response to chemical strikes on civilians rather than military units should be far more severe.

Dr. Notte of Middlebury said people feared chemical arms not only because of their horrific consequences for humans but also because of the response dilemma.

“The reason it scares people is we don’t have good answers should it happen,” she said. “Russia understands that we’re constrained, and that raises fears.”