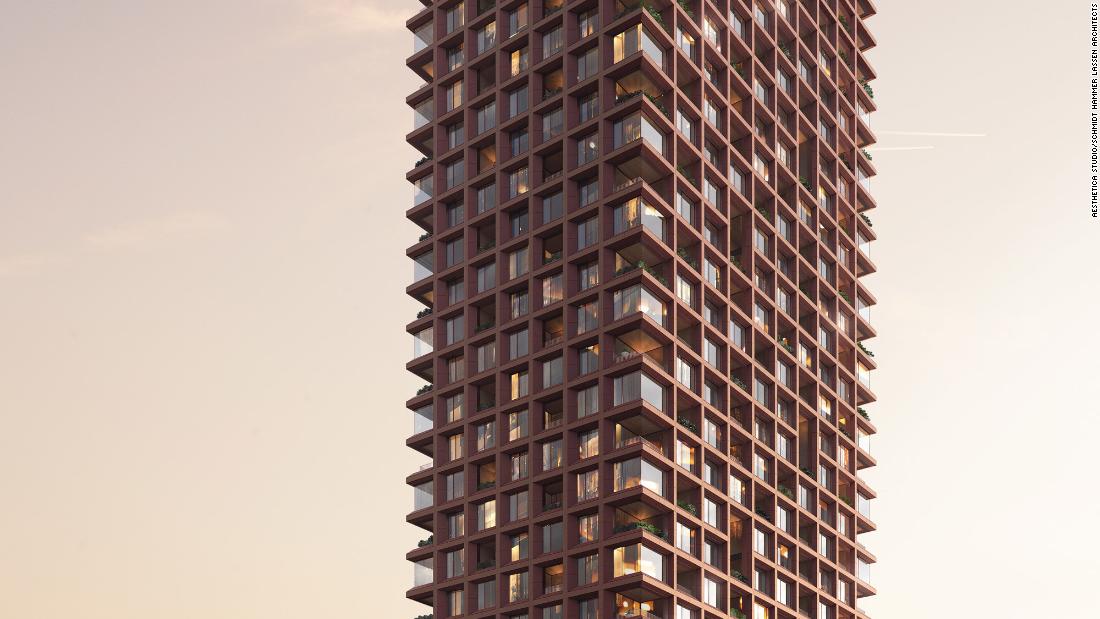 Switzerland is set to become home to the world’s tallest timber residential building.

The project, named Rocket&Tigerli, will consist of four buildings including one that boasts a 100-meter-tall (328-foot) tower. The development will be built in the Swiss city of Winterthur, which is located near Zurich.

The design will offer modern, high-quality housing with a maximum inflow of daylight, according to its designers, the Danish firm Schmidt Hammer Lassen Architects (SHL). It will also seek to create an active neighborhood that will be “rooted in the area’s historical context,” according to a press release from the firm. The facade, for example, will be covered in dark red and yellow terracotta bricks combined with dusty green-colored details — in keeping with the red roofs and yellow bricks of the older buildings in the surrounding area.

The building, named Rocket&Tigerli after locomotives once produced at the site of its development, will be built in Winterthur. Credit: Aesthetica Studio/Schmidt Hammer Lassen Architects

“We approach this project with a great sense of humbleness,” Kristian Ahlmark, partner and design director at SHL, is quoted as saying in the press release.

“It is a big project that will have a significant influence on the community, socially as well as aesthetically. Because of the strong expertise Switzerland has, when it comes to building in wood, we are particularly proud to be working on this ground-breaking project.”

The four buildings will comprise of housing facilities as well as spaces for retail, a sky bar and a hotel. It is expected to be completed and ready for residents to move into by 2026.

The 100-meter-tall construction will follow a system which replaces a concrete core with wood. Credit: Aesthetica Studio/Schmidt Hammer Lassen Architects

The project marks a milestone in the construction of timber buildings, said SHL. The firm added that, at 100 meters, it sets the record for residential buildings with a load-bearing timber construction, and “introduces an innovative construction system that examines wood as a natural replacement for concrete.”

The building will offer modern, high-quality housing with a maximum inflow of daylight, according to the designers. Credit: Aesthetica Studio/Schmidt Hammer Lassen Architects

“This makes it possible to build taller constructions while, at the same time, ensures that the entire building process achieves a lower amount of embedded carbon,” the press release stated.

Ahlmark added: “We have always been proactive in our use of the material (wood), not just because of its aesthetic qualities, but also because of the technical construction possibilities it paves the way for. The new production method, presented in this project, brings our love for the material into a modern building.”

SHL competed with eight other architecture companies around the world to design the building. Earlier this year, its design proposal was chosen as the winner — in part because of its open block structure.

The jury said in its assessment: “By dissolving the original block structure and integrating the detached buildings a larger facade area is achieved and thus more daylight, as well as a stronger connection to the surrounding environment.”

The wide range of facilities is designed to activate the neighborhood throughout the day, bringing life to the bright passages and green open plaza orchestrated by the four buildings, according to SHL. Credit: Aesthetica Studio/Schmidt Hammer Lassen Architects

The project joins other architectural ventures looking to prove that timber can be used as a sustainable alternative to concrete and steel when building high-rises. The 280-foot-tall Mjøstårnet tower in the Norwegian town of Brumunddal became the world’s tallest timber building when it opened in 2019. The 18-story structure contains apartments, office space and the aptly named Wood Hotel.